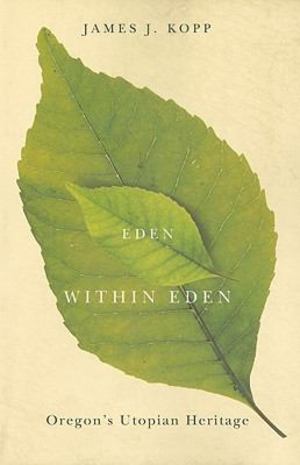 James J. Kopp
Oregon has been the home of nearly three hundred communal experiments since the Aurora Colony was established in 1856. Eden Within Eden is the first book to survey the states utopian history, from religious and Socialist groups of the nineteenth century to ecologically conscious communities of the twenty-first century. James J. Kopp examines Oregons communal history in the context of the state as a destination for those seeking new beginnings and in the framework of utopian and communal experiences across America. Eden Within Eden provides rich detail about utopian communities some realized, some only plannedmany of which reflect broader social, political, economic, and cultural aspects of Oregons history. From the dawn of communal groups in Oregonthe German Christian colony at Aurorato Oregons most infamous communal experimentRajneeshpuramthis study examines the range of attempts to establish ideal communities in the state. These include the Jewish agrarian colony of New Odessa in the 1880s as well as the new pioneers of the 1960s and later who captured the spirit of the counterculture as well as growing concerns about the environment. The book explores other areas of Oregons utopian heritage as well, including literary works and idealistic city planning. There has been no comparable book published on Oregons communal history and few such comprehensive examinations of other states. The appendix is a rich compilation that will guide individuals to additional information on the profiledand many othercommunities. Eden Within Eden will appeal to students and scholars of communal studies and Pacific Northwest history, as well as to general readers interested in these subjects.