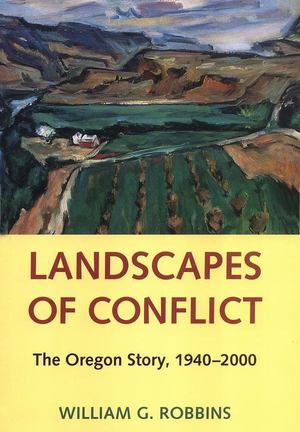 William G. Robbins, William Cronon (Foreword by)
Post-World War II Oregon was a place of optimism and growth, a spectacular natural region from ocean to high desert that seemingly provided opportunity in abundance. With the passing of time, however, Oregon's citizens -- rural and urban -- would find themselves entangled in issues that they had little experience in resolving. The same trees that provided income to timber corporations, small mill owners, loggers, and many small towns in Oregon, also provided a dramatic landscape and a home to creatures at risk. The rivers whose harnessing created power for industries that helped sustain Oregon's growth -- and were dumping grounds for municipal and industrial wastes -- also provided passageways to spawning grounds for fish, domestic water sources, and recreational space for everyday Oregonians. The story of Oregon's accommodation to these divergent interests is a divisive story between those interested in economic growth and perceived stability and citizens concerned with exercising good stewardship towards the state's natural resources and preserving the state's livability. In his second volume of Oregon's environmental history, William Robbins addresses efforts by individuals and groups within and outside the state to resolve these conflicts. Among the people who have had roles in this process, journalists and politicians Richard Neuberger and Tom McCall left substantial legacies and demonstrated the ambiguities inherent in the issues they confronted.