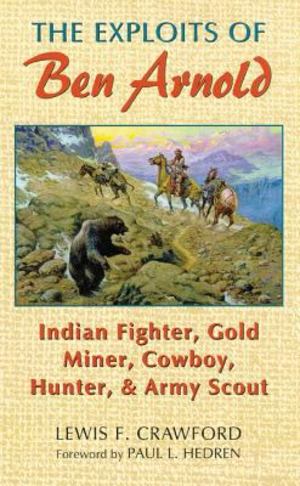 Lewis F. Crawford, Paul L. Hedren (Foreword by)
Ben Arnold (Connor), soldier, gold-seeker, bullwhacker, scout, hunter, cowboy, trader, miner, interpreter, and homesteader, epitomized the restless frontiersman. Through Arnold's recollections, the reader can experience life in the post-Civil War West. "The young Indians did not want to part with the Black Hills at any price, and not until the latter part of September did the treaty finally get under way. The treaty was attended by many renowned chiefs and their prominent followers. They were suspicious of the whites and it seemed evident from the first that the conference would not be able to accomplish its purpose-the bloodless acquisition of the Black Hills. Fortunately for me I had brought over the mail from Running Water and had the opportunity of hearing the treaty. I had given out beef issues to every agency represented and interested in the Black Hills. I knew the chiefs and leading men in every Sioux tribe and was able to converse with them without the necessity of an interpreter.... The situation was so tense that soldiers were sent over from Fort Robinson. Bloodshed seemed eminent. Had a gun been accidentally discharged, the life of every white man present would have been snuffed out instantly." "Arnold was a soldier in the Civil War, deserted on his second enlistment, and re-enlisted under an assumed name for service on the western Indian Frontier. On his way west, he helped to chase the guerrilla Quantrill, saw the smoke of burning Lawrence, traversed the Oregon Trail, and tarried by the way at Fort Kearney, Doby Town, Julesburg, and Fort Laramie. Stationed as a military guard on the telegraph line west of Laramie, Arnold herded horses, hunted bear, became acquainted with Joe Slade and other notorious plainsmen, and saw something of Brigham Young's Destroying Angels. Deserting again, Arnold went to the Snake River, across which he helped to ferry the ceaseless western-bound horde. Stampeding to Virginia City, he described the great Montana gold rush. He visited every trading post along the Missouri and became acquainted with all the characters of note, both white and Indian. Married to an Indian woman, he became skilled in Indian language and customs, took part as interpreter in the making of several treaties, and served as dispatch bearer in the Crook campaign." --Horace Bagley, North Dakota Historical Quarterly