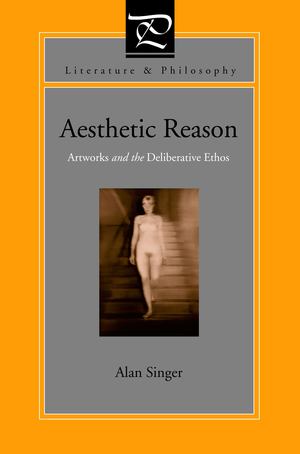 Alan Singer
In recent years the category of the aesthetic has been judged inadequate to the tasks of literary criticism. It has been attacked for promoting class-based ideologies of distinction, for cultivating political apathy, and for indulging irrational sensuous decadence. Aesthetic Reason reexamines the history of aesthetic theorizing that has led to this critical alienation from works of art and proposes an alternative view. The book is a defense of the relevance and usefulness of the aesthetic as a cognitive resource of human experience. It challenges the contemporary critical tendency to treat aesthetic value as separate from the realms of human agency and sociopolitical change. The argument unfolds through a review of the cognitivist traditions in post-Enlightenment aesthetic theory and through Singer's own articulation of a model of ethical subjectivity that is derived from the Greek concept of akrasia, which recognizes the intrinsic fallibility of human action. His focus on akratic subjectivity is aimed at revealing how the artwork has the potential to enhance human development by cultivating habits of self-transformation. Along these lines, he shows that the aesthetic has affinities with the logic of reversal/recognition in Greek tragedy and with theories of subject formation based on intersubjective recognition. The marking of these affinities sets up a discussion of how the aesthetic can serve protocols of rational choice-making. Within this perspective, aesthetic practice is revealed to be a meaningful social enterprise rather than an effete refuge from the conflicts of social existence. The theoretical scope of the book encompasses arguments by Plato, Aristotle, Nietzsche, Kant, Hegel, Adorno, Lyotard, Bourdieu, Derrida, Althusser, and Nancy. Singer's exposition of "akratic subjectivity" is advanced through readings of literary texts by Sophocles, Melville, Beckett, Joyce, and Faulkner as well as visual texts by Caravaggio, Cindy Sherman, Barbara Kruger, and Gerhard Richter.