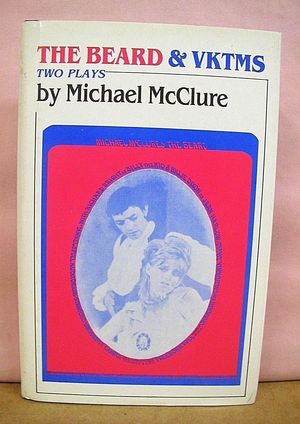 Michael Mcclure
"Jean Harlow and Billy the Kid meet up and have sex in this absurdist, Pop Art play that used to get busted for obscenity. Isn’t now the perfect time to bring it back and turn it into a Broadway musical?" - John Waters NY Times 2015. The play that made its debut as the greatest cause celebre in modern drama, The Beard is a bold and poetic work about two mythic figures in American culture—Jean Harlow and Billy the Kid. “Almost as if two ghosts from two periods of the American past were speaking across decades to each other, and yet at the same time are present in our living room undressing themselves or speaking to us of the nature of seduction, the nature of attraction, and particularly, the nature of perverse temper between a man and a woman…The Beard plays masterfully, be it said, like a juggler.” —from the Foreword by Norman Mailer. “The Beard is a milestone in the history of heterosexual art.” —Kenneth Tynan The play has elicited both fierce controversy and high critical praise. It won two Obie awards when produced in New York. Yet, during the first Los Angeles performances, its cast was arrested fourteen times in a row. Like Billy the Kid and Jean Harlow, Orestes and Elektra in VKTMS are a mythic pair. McClure has taken the lore from Euripedes and Sartre and created a forceful play about human beings searching for consciousness, stunned by the brutality of their actions.