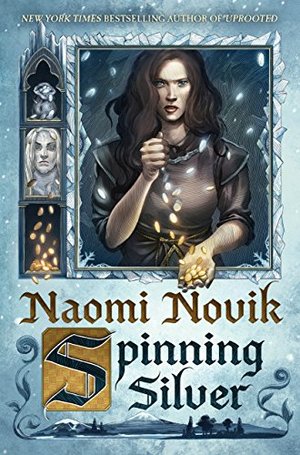 Naomi Novik
A fresh and imaginative retelling of the Rumpelstiltskin fairy tale from the bestselling author of Uprooted, which was hailed as “a very enjoyable fantasy with the air of a modern classic” by The New York Times Book Review. With the Nebula Award–winning Uprooted, Naomi Novik opened a brilliant new chapter in an already acclaimed career, delving into the magic of fairy tales to craft a love story that was both timeless and utterly of the now. Spinning Silver draws readers deeper into this glittering realm of fantasy, where the boundary between wonder and terror is thinner than a breath, and safety can be stolen as quickly as a kiss. Miryem is the daughter and granddaughter of moneylenders, but her father’s inability to collect his debts has left his family on the edge of poverty—until Miryem takes matters into her own hands. Hardening her heart, the young woman sets out to claim what is owed and soon gains a reputation for being able to turn silver into gold. When an ill-advised boast draws the attention of the king of the Staryk—grim fey creatures who seem more ice than flesh—Miryem’s fate, and that of two kingdoms, will be forever altered. Set an impossible challenge by the nameless king, Miryem unwittingly spins a web that draws in a peasant girl, Wanda, and the unhappy daughter of a local lord who plots to wed his child to the dashing young tsar. But Tsar Mirnatius is not what he seems. And the secret he hides threatens to consume the lands of humans and Staryk alike. Torn between deadly choices, Miryem and her two unlikely allies embark on a desperate quest that will take them to the limits of sacrifice, power, and love. Channeling the vibrant heart of myth and fairy tale, Spinning Silver weaves a multilayered, magical tapestry that readers will want to return to again and again.Advance praise for Spinning Silver“A book as cool and mysterious as a winter’s night, with two marvelous heroines at its heart. Spinning Silver pits the cold of endless winter against the fires of duty, love, and sacrifice. I couldn’t put it down.”—Katherine Arden, New York Times bestselling author of The Bear and the Nightingale “Naomi Novik knows how to weave words into magic, and Spinning Silver enchants the reader from the first page. This magnificent tale of three courageous young women who find the power to change their fates will catch you in its spell and linger long after the last chapter is read.”—Christina Henry, nationally bestselling author of The Mermaid

@azidearest
Reviewed: 2019-09-15
Exceptionally creative, utterly engrossing, and EXACTLY what I needed at this moment.
@bridgebury
Reviewed: 2018-11-27

It's hard to write about Spinning Silver without talking about the other book in this "series," Uprooted, much as it's hard to read Spinning Silver after reading Uprooted without comparing the two. These books are not, however, related in anything more than the way that they continuously subvert fairytale tropes. Spinning Silver is a retelling of Rumplestiltskin where Uprooted was a retelling of some tropes without being a retelling of a particular identifiable fairy story, but both have the same relentless rate of reveal that changes your understanding of the story that you're reading every couple of chapters, and a strong focus on female friendship, that I loved so much in Uprooted. I particularly enjoyed the tensions at the start of the book, which centered so much around the ways that the jewish family at the center of the book are othered in their own hometown. The story didn't appeal to me quite as much when it moved into a larger good vs. evil narrative that was still engaging, but not quite as nuanced and personal as the first part of the book. I feel like Uprooted did a better job of keeping things nuanced and personal throughout in a way that Spinning Silver didn't, but that more because Uprooted is a work of genius than because this book is bad. In fact, this book is still really, really good, and I would recommend it if you enjoyed Uprooted. It would also probably be a good winter/holiday read since there is so. much. snow.