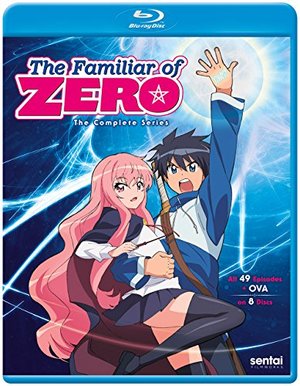 The Familiar of Zero Complete Series contains episodes 1-13 of season 1, episodes 1-12 of season 2, episodes 1-13 of season 3, and episodes 1-12 of season 4. Between her poor spellwork and long name, the other students at the Tristain Academy of Magic have taken to calling poor Louise Françoise Le Blanc de La Vallière, "Louise the Zero." Things only get worse when the students summon up their familiars, because while others receive fantastic creatures like dragons, Louise summons a normal teenager from Tokyo! While Louise may be stuck with Hiraga Saito, and Saito's stuck with the lousy life of being her familiar, maybe there's more going on than meets the eye. Maybe Saito's not quite as normal as everyone thinks, and Louise just hasn't figured out what she's good at yet. In fact, they might even have the makings of a great team once they start to get 'familiar' with each other! One of anime's wildest romances is unleashed in this ultimate complete collection! Special Features: Extended Episode Previews, Japanese Promos, Clean Opening Animation, and Clean Closing Animation.