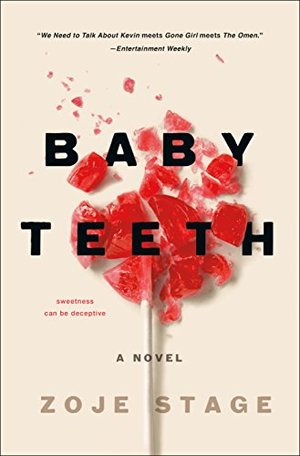 Zoje Stage
"Best Summer Reads for 2018" ―Publishers Weekly“We Need to Talk About Kevin meets Gone Girl meets The Omen....a twisty, delirious read that will constantly question your sympathies for the two characters as their bond continues to crumble.” ―Entertainment Weekly“A deliciously creepy read.” ―New York Post"A pulse-spiking thriller." ―PopSugarIn the tradition of ROOM comes a debut about a mom desperate to find help for her young daughter, whose disturbing behavior grows increasingly dangerous.“Unnerving and unputdownable, Baby Teeth will get under your skin and keep you trapped in its chilling grip until the shocking conclusion.” ―New York Times bestselling author Lisa Scottoline~~~Suzette is unable to form a bond with her seven-year-old daughter, who cannot―or will not―speak. Ever since Hanna was a baby, she felt rejected by her. It’s as if the child hates her, leaving Suzette very frightened.Alex wants to believe his wife’s accounts of their daughter’s cruel and unusual behavior, but he’s never seen anything but her love. Is Hanna just a naughty girl whose antics reveal intelligence, creativity, maybe even charm? Or is she actually trying to kill her mother?A powerhouse, razor-sharp novel of psychological suspense from blazing new talent Zoje Stage, Baby Teeth raises more questions than it answers―and will leave you guessing until its shocking conclusion.

@braign
Reviewed: 2019-12-31
I literally had just been reading the real-life story of "Samantha", who was diagnosed as a "budding psychopath" (with Callous-Unemotional traits) at 6 years old. After I read the article, I thought to myself, someone should write a book about this. Then Baby Teeth fell in my lap.

If you're reading these reviews you'll already know what the story is about. 7 year old Hanna Jensen and her picture perfect family - good jobs, scads of cash, and a disturbing secret.

It was a fun read, I did not want to put it down once I got going. And it was a quick read, which is a bonus for me because I have a toddler running around (a very empathetic one - and believe me, after reading this, I checked!)

I liked that I could dislike the mother, father and the child at the same time - that one wasn't written as flawless and the other ones flawed. Everyone in the book was flawed in some way. From the Doctors who didn't want to deal with the problem, to the parents who made some very selfish choices.

I'm not typically a horror-reader (or watcher), so I can't speak of how well it fits into its prescribed genre. But I did enjoy it, so maybe it's opened up a whole new genre for me!
@pixielesher
Reviewed: 2018-07-30

This is a story told between a mother, Suzette, and her six year old daughter Hanna. I don't want to reveal too much about the plot, but Hanna makes Rhoda in the Bad Seed look like a saint.

I can't recommend this book enough. It's not an easy read and there were times I thought about the mother I'd become had I had a daughter like Hanna and a husband like Alex. Put in Suzette's situation I think I would have left father and daughter together.