Martian: A Novel, The 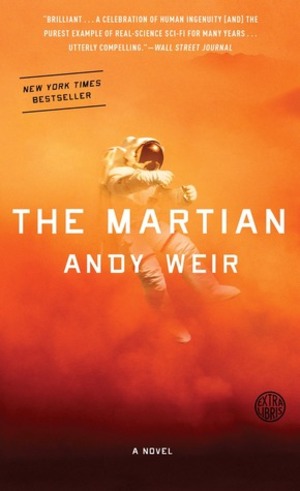 Andy Weir
Six days ago, astronaut Mark Watney became one of the first people to walk on Mars. Now, he's sure he'll be the first person to die there.After a dust storm nearly kills him and forces his crew to evacuate while thinking him dead, Mark finds himself stranded and completely alone with no way to even signal Earth that he’s alive—and even if he could get word out, his supplies would be gone long before a rescue could arrive. Chances are, though, he won't have time to starve to death. The damaged machinery, unforgiving environment, or plain-old "human error" are much more likely to kill him first. But Mark isn't ready to give up yet. Drawing on his ingenuity, his engineering skills—and a relentless, dogged refusal to quit—he steadfastly confronts one seemingly insurmountable obstacle after the next. Will his resourcefulness be enough to overcome the impossible odds against him?

I saw the film first and loves it, which is why I bought the book. To start, this book was excellently written, the time and dedication put into the research to make this as scientifically accurate as possible is just amazing. That being said, a good bit of the science of it, while fascinating, was boring. If it weren't for the bits of humor thrown in as well as Wil Wheaton's excellent narration, I would have snoozed on this. Not a bad book, just not for me.
@morteana
Reviewed: 2018-01-25
I LOVED this book.

Even though I saw the movie before reading the book, I feel like I have a lot to wrap my head around.

Science fiction is not my favorite of all favorite genres because it gets really technical.  I love the ideas, but when you get too explainy with the science, my brain turns to mush.  This is possibly the most explanation-heavy science fiction book ever.  I’m serious.  There is SO much time spend talking about chemistry and engineering and botany and hypotheticals and jet propulsion and… so much science.  At least 75% of the book is explanations.

The other 25% of the book is the wonderfulness that is Mark Watney.

Without Mark Watney, this book would be nothing.

It is his snark and optimistic pessimism that keeps this story from being an interaction manual for survival on Mars (under the luckiest of circumstances).  The challenge Andy Weir faced in writing this book is making a character so likable that not only is the reader rooting for his survival, but the reader doesn’t second guess when other decide to devote so much risk, time, and money to his rescue.  Mark is absolutely that character.

Mark isn’t all science.  He is smart and well-studied – that’s abundantly clear.  He also is real.  You find him contemplating Aquaman and declaring himself a pirate.  He gets such glee when he learns from his alma mater that he has technically colonized the planet, so he’s the original Martian.  I won’t say much more here about his quips, because they take you by surprise and make you laugh out loud.  I don’t want to spoil them for anyone, but rest assured, he’s a great character.

His odds of survival were astronomical.

I think that the author/character acknowledges this fairly well with the opening line of the book.  I mean, when you open a novel and the first sentence is “I’m fucked.” you know that something really terrible has gone down and we’re in a bad situation.  Before nearly every experiment, Mark talks about how he’s probably going to die, but what the hell?  Literally every single odd would have to be in his favor for him to get off Mars, and there’s a lot of criticism in the reviews about it.  Okay, I agree.  The chances of these things happening in real life are basically zero.

You know what else?  This is fiction.

I for one would have been miffed if Mark died to make this “more realistic” for a small slice of the populace.

When it was published, The Martian got a lot of hype and you may recall the movie starring Matt Damon from 2015?  The movie does a fantastic job representing the book with a few minor changes to move things along or make it a wee bit more exciting.  But this book has so many more laugh out loud moments.  Don’t get me wrong – Damon was perfection.  But read the book as well or you’re missing out.  The scientific jargon is easy enough to power through and it’s told mostly in Mark’s voice, so it’s easy to read and interwoven with predictions of his own death and random sarcastic comments that will make you chuckle.

Read the book.  See the film.  They’re both worth your time.

I loved this book. Mark is just so funny and the story is so compelling that it's hard to stop reading. You just can't wait to hear the next joke and to figure out how he's going to get himself out of his newest problem.

Gripping, high-technical, and sometimes funny account of one man's attempt to survive on Mars for an extended period and make it back to Earth.

I liked that his journal entries sounded like blog posts instead of dry scientific jar-gon. It really helped his personality come through, and when it's one man against the world (literally) personality goes a long way. I liked that he was funny, but in surgically precise amounts, not an over-the-top always-on goofball. He was a multi-layered human character, who accidentally made trouble for himself (as do we all, some days).

Minor plot spoiler but not really[: why would NASA pack the emergency supply pod with protein bars from the grocery store? Do they not already have a supply of space food on hand? How hard is it to make that dehydrated stuff? I felt like that was a seriously weak plot contrivance.

Also, I know NASA and JPL are populated with plenty of geniuses to get things done, but I still kind of expected a solution to come from crowdsourcing. I mean, if everyone in the world, or even just the US, is into the Mark Watley show, lots of people are going to be thinking about his predicament and throwing around ideas and solutions.

At least there weren't any jokes about Chinese take-out when the booster delivered the supplies to Hermes. (hide spoiler)]

Having just finished Seveneves, I see a lot of similarities between the two, although Stephenson's book is much more Epic; it was also a harder read than The Martian, and I found I had to take breaks to either process some of Stephenson's ideas, or to step away from the Drama. With the Martian, you get Action and Adventure and a story starring Mars' Luckiest Man Alive.