Alchemyst (The Secrets of the Immortal Nicholas Flamel), The 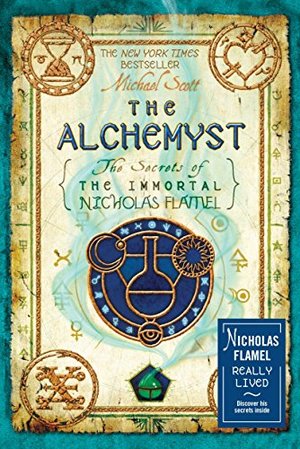 Michael Scott
He holds the secret that can end the world.The truth: Nicholas Flamel was born in Paris on September 28, 1330. Nearly 700 years later, he is acknowledged as the greatest Alchemyst of his day. It is said that he discovered the secret of eternal life.The records show that he died in 1418. But his tomb is empty.The legend: Nicholas Flamel lives. But only because he has been making the elixir of life for centuries. The secret of eternal life is hidden within the book he protects—the Book of Abraham the Mage. It's the most powerful book that has ever existed. In the wrong hands, it will destroy the world. That's exactly what Dr. John Dee plans to do when he steals it. Humankind won't know what's happening until it's too late. And if the prophecy is right, Sophie and Josh Newman are the only ones with the power to save the world as we know it. Sometimes legends are true. And Sophie and Josh Newman are about to find themselves in the middle of the greatest legend of all time.

@adamcarlson
Reviewed: 2020-09-09
Uninteresting protagonists. Poorly defined magic system. Outdated technology references (iPod, blogs, etc.). Most fantasy series with a messianic coming-of-age storyline feature a long learning period in which the protagonist laboriously gathers the skills and knowledge needed to fulfill their destiny. The struggle to gain this knowledge makes the payoff at the end feel earned. Michael Scott took his story a different direction, and it felt cheap. So far, Sophie hasn’t had to work for her powers at all. Flamel takes her to Hekate, who Awakens her power without asking for anything in return. Then he takes her to the Witch of Endor, who gifts Sophie with all her knowledge and power, again without asking anything in return. This feels more like a cheap scavenger hunt than an arduous journey of personal growth. So Nicholas Flamel loses the Codex, and now can’t create his immortality potion, meaning he’ll die within a month. Did he never bother creating a copy of any of the information in the Codex? It seems like a good idea to create a backup copy of something that one’s life literally depends on. Minor point that bothered me: near the end of the book, John Dee animates a number of corpses from a nearby mass grave, including the corpses of Civil War soldiers...in Ojai, California. I may be wrong here, but I wasn’t aware of any battles between Union and Confederate soldiers in California.
Item Posts
@jazzd973y 5mo
completed ... on 2018-08-23
@jazzd973y 5mo
began ... on 2018-07-28
@bchamb1214y 5mo
completed ... on 2017-08-13
© 2022 libib.com / All rights reserved