Kill the Farm Boy: The Tales of Pell 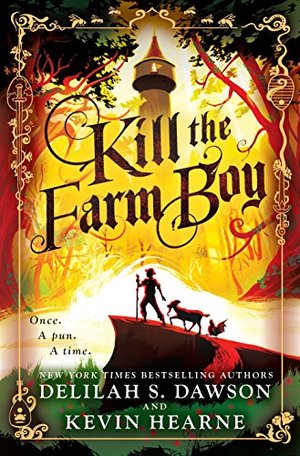 Kevin Hearne, Delilah S. Dawson
In an irreverent new series in the tradition of Monty Python, the bestselling authors of the Iron Druid Chronicles and Star Wars: Phasma reinvent fantasy, fairy tales, and floridly written feast scenes. “Ranks among the best of Christopher Moore and Terry Pratchett.”—Chuck Wendig“When you put two authors of this high caliber together, expect fireworks. Or at least laughs. What a hoot!”—New York Times bestselling author Terry Brooks Once upon a time, in a faraway kingdom, a hero, the Chosen One, was born . . . and so begins every fairy tale ever told.             This is not that fairy tale.             There is a Chosen One, but he is unlike any One who has ever been Chosened.             And there is a faraway kingdom, but you have never been to a magical world quite like the land of Pell.             There, a plucky farm boy will find more than he’s bargained for on his quest to awaken the sleeping princess in her cursed tower. First there’s the Dark Lord, who wishes for the boy’s untimely death . . . and also very fine cheese. Then there’s a bard without a song in her heart but with a very adorable and fuzzy tail, an assassin who fears not the night but is terrified of chickens, and a mighty fighter more frightened of her sword than of her chain-mail bikini. This journey will lead to sinister umlauts, a trash-talking goat, the Dread Necromancer Steve, and a strange and wondrous journey to the most peculiar “happily ever after” that ever once-upon-a-timed. Advance praise for Kill the Farm Boy “A rollicking fantasy adventure that upends numerous genre tropes in audacious style, the first installment of Dawson and Hearne’s Tales of Pell series is a laugh-out-loud-funny fusion of Monty Python–esque humor and whimsy à la Terry Pratchett’s Discworld.”—Kirkus Reviews

@azidearest
Reviewed: 2019-01-27
There are two ways to do a parody- one results in things like Kingsman, the other results in things like Austin Powers. This book billed itself as the 'Kingsman' type (by comparing itself to Princess Bride and Terry Pratchett) when it's really the 'Austin Powers' type. Maybe if you go into it expecting the Austin-Powers-style-parody, then it'd be really good. But I did not finish this book because it was not at all what I was expecting or wanting.
Item Posts
@azidearest1y 4mo
began ... on 2019-01-05
© 2020 libib.com / All rights reserved