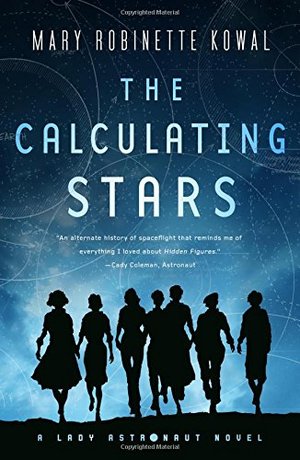 Mary Robinette Kowal
Mary Robinette Kowal's science fiction debut, The Calculating Stars, explores the premise behind her award-winning "Lady Astronaut of Mars." Den of Geek―Best Science Fiction Books of June 2018Omnivoracious―15 Highly Anticipated SFF Reads for Summer 2018On a cold spring night in 1952, a huge meteorite fell to earth and obliterated much of the east coast of the United States, including Washington D.C. The ensuing climate cataclysm will soon render the earth inhospitable for humanity, as the last such meteorite did for the dinosaurs. This looming threat calls for a radically accelerated effort to colonize space, and requires a much larger share of humanity to take part in the process.Elma York’s experience as a WASP pilot and mathematician earns her a place in the International Aerospace Coalition’s attempts to put man on the moon, as a calculator. But with so many skilled and experienced women pilots and scientists involved with the program, it doesn’t take long before Elma begins to wonder why they can’t go into space, too. Elma’s drive to become the first Lady Astronaut is so strong that even the most dearly held conventions of society may not stand a chance against her.

I have picked up this book following the Novella "The Lady Astronaut" that was greatly acclaimed. I had found the novella ok, but not awesome. I also don't like the novella format much.

However, I very much enjoyed the calculating stars. More than SF, I find it to be actually a great book on the 50's and how a space program might work, politically, scientifically, ...

The narrator being a women, you can see firsthand all the prejudices that she has to fight against. But interestingly, the society has a lot of prejudices about black people too, and so does the narrator even if she often fails to realise this at first.

It is an amazing story of emancipation, of human relations, of breaching a divide due to a common goal (nations coming together, man/woman starting to be considered for the same astronauts positions, colored people starting to be integrated). This is happening due to necessity of survival and it's interesting to follow this story

Warning - This review contains some spoilers.

First, the good stuff. It's an entertaining read, with a good and inspiring story. It didn't drag in any chapter and every part of the story was essential. The fact that this fiction has actual historical events / elements mixed in, makes it all that more interesting. I will be starting the second book tomorrow.

1) the "rocket launch" innuendo. It was funny the first time, and maybe the second time. But the same innuendo being used every time got very irritating.

Narration wise, I didn't find much variation in the narrator's voice. All male voice renditions sounded the same.

@guackylib
Reviewed: 2019-03-23
Dreadful. Would have assumed it’s a YA book but except for lots of sexual reference. Author seems to have an obsession with sweating.
@bridgebury
Reviewed: 2018-10-19

The Calculating Stars is the first book in an alternate history science fiction duology about what would have happened if a meteor hit Washington D.C. in 1952, devastating the eastern seaboard and causing climate change that necessitates humanity getting off of Earth and starting colonies on other planets ASAP. It's told from the POV of a jewish calculator for NASA who also suffers from anxiety.

I read this book almost immediately after reading Hidden Figures, and the pairing could not have been more perfect. Elma is such a wonderful main character, and Kowal does an amazing job of showing a character that was marginalized in several different ways still manages to become one of the most important people in NASA's space program. It also deals with her privelege in relation to people more marginalized than herself, which I greatly enjoyed. Honestly, I enjoyed this whole book immensely, and would happily recommend it to anyone, whether you've read Hidden Figures or not. This would also be a great recommendation if, like me, you recently saw First Man, and wished we had seen, I don't know, *any* women working at NASA in the movie.