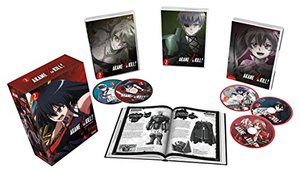 The convoluted path that has reunited Tatsumi and Esdeath takes another twist as they find themselves transported to a remote island where their strength will be tested as never before. Dr. Stylish may be dead, but Danger Beasts still remain, and that's only the first challenge the two enemies now face. If the bonds of love weren't enough to bring their fates together, could the fire of combat forge a new form of alliance? Meanwhile, the embers of rebellion are being stoked into open insurrection by the pacifist organization Path of Peace. Drawn into the impending inferno, Night Raid and the Revolutionary Army prepare for a major assault on the Capital. But while their Imperial Arms may be indestructible, their wielders are merely flesh and blood.On the anvil of battle, only human courage and the willingness to give their lives for a cause will lead to the ultimate triumph or failure in collection 2 of Akame ga Kill!Contains episodes 13-24 plus a chipboard box, booklet, and 3 CDs.Special Features: AkaKill! Theatre, Japanese Promo, Clean Opening and Closing Animations. Spoken Languages: English, Japanese, English subtitles.