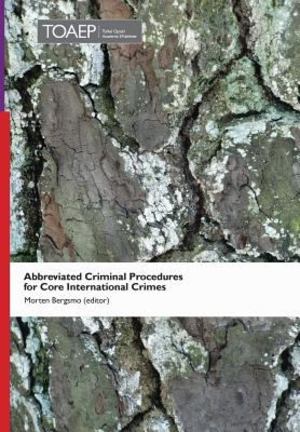 Morten Bergsmo (Editor)
This book is about jurisdictions that open more war crimes case files than they can process by trial. Such situations are characterised by a backlog of opened case files. The book discusses the legal policy question whether new forms of abbreviated criminal procedures should be created for such situations, to process high numbers of less serious core international crimes on the basis of criminal law and procedure. The volume is not about countries that have suffered many war crimes but without opening more case files than they can handle. Nor is it about the mapping of backlogs of cases, prioritisation of cases, non-criminal justice responses to core international crimes, or reducing the length of standard proceedings. In his Chapter 1, the editor Morten Bergsmo suggests that, upon reflection, this would seem to be one of the main areas of international criminal procedure that remains under-researched. He argues that ideas should be found in national abbreviated criminal procedures, in particular in Italian law - as analysed in Chapter 3 by Kai Ambos and Alexander Heinze - rather than primarily in the limited transitional justice practice on the question. The book presupposes that abbreviated criminal procedures for core international crimes are in accordance with international human rights standards and consensual in nature. The volume has further contributions by Jan Braathu, Meddzida Kreso, Milorad Novkovic, Mark Drumbl, Ilia Utmelidze, Gorana Zagovec Kustura, Maria Paula Saffon, Phil Clark, Gilbert Bitti, Marieke Wierda and Hanne Sophie Greve.