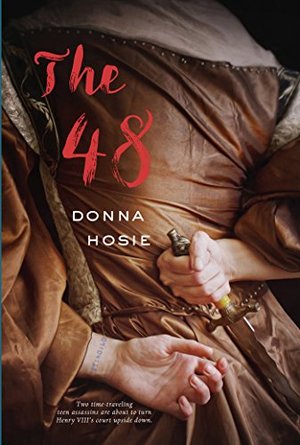 Donna Hosie
Henry VIII's Tudor court meets time-traveling teen assassins in a riveting YA novel.Twins Charlie and Alex Taylor are the newest time travelers recruited to the Forty-Eight, a clandestine military group in charge of manipulating history. The brothers arrive in 1536 feeling confident, but the Tudor court is not all banquets and merriment: it is a deep well of treachery, torture, lust, intrigue, and suspicion. The boys' mission to prevent Henry VIII from marrying Jane Seymour is further complicated when Alice, a fellow trainee, appears under mysterious and brutal circumstances--and when whispers of an uprising within the Forty-Eight reach their ears. Told in alternating perspectives among Charlie, Alex, and sixteen-year-old Lady Margaret, a ladies' maid to Queen Anne Boleyn with an agenda of her own, The 48 captures the sights, smells, sounds, and hazards of an unhinged Henry VIII's court from the viewpoint of one person who lived that history--and two teens who have been sent to turn it upside down.