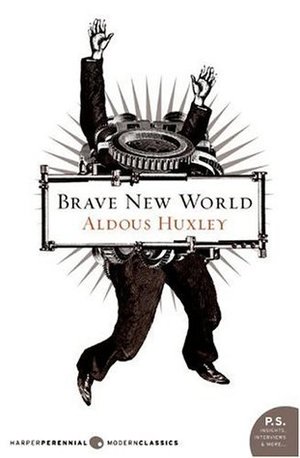 Aldous Huxley
Aldous Huxley's tour de force, Brave New World is a darkly satiric vision of a "utopian" future—where humans are genetically bred and pharmaceutically anesthetized to passively serve a ruling order. A powerful work of speculative fiction that has enthralled and terrified readers for generations, it remains remarkably relevant to this day as both a warning to be heeded as we head into tomorrow and as thought-provoking, satisfying entertainment.

@zairhazerdane1
Reviewed: 2020-03-20
I had high hopes with this book. But Aldous decided to stomp on it. The idea’s unparalleled. But his way of delivery is a huge failure. He could’ve achieved more if he decided to use a different way of writing. Most of the book is a snooze fest.
@ellamc
Reviewed: 2019-03-29

I don't recall it being so jaunty and funny when I was in school. Great fun, but I do wish I'd read with a class or taken a class, so I'd know better what all the symbols and meanings behind the obvious are.

Not much actually happens in the book, despite its length. It was a bit boring and at times was sickening due to the worldview and anthropology of the characters. Overall it was not worth the time to read this.

This book gave me a lot to think about in relation to the nature of happiness and free will and I don't think i'll ever look at the world quite the same after reading it.

Set in a “utopian” future in which mankind has established complete and perfect control over every aspect of life, Brave New World is a cautionary tale about humanity’s future, a startling warning about the horrors of a world that sacrifices half its soul for the sake of stability and happiness.

Henry Ford is the new God, and industrial efficiency is the new religion. Conditioned from birth, citizens of this new world know only the unwavering regime of recreational sex, soma holidays to escape hardships, and fulfilling their predestined duty in life. But a few go against the established order. Bernard Marx is too emotional; Helmholtz Watson is too poetic; and John the Savage is too, well, uncivilized. Their clashes with society speak to various aspects of the human condition, such as cowardice, acceptance, art and beauty, and ownership of oneself.

Brave New World is a story about humans struggling to find a place for their humanity in a world that has no need for it, that is hindered and disrupted by it. But perhaps the central question Huxley asks is, What price are we willing to pay? And I think it is nice that Huxley does not give a final, definitive answer. He hints and alludes; he leans one way and then the other; he plays both sides of the fence in a convincing and logical manner. He makes us believe that his imagined utopia would not be so bad, but never enough to rally us completely to its artificial and sterilized machinations. At the same time, Huxley champions the cause of men like Shakespeare, who were unafraid to explore life as a whole, to expose its dizzying highs and unfathomable lows; but he also admits how this way of life can be violent and brutish.

copies no copies of this version at this time

This is a "be careful what you wish for" kind of book. I think people wish that society was like this book - always happy, freely sexual without commitments, safe drugs with no consequences, someone happy to do the jobs we don't want to do etc. but I don't think anyone really wants a place like described in this book. I think the best inventions came about because someone was bored or unhappy and wanted things better. I think parents, who may be completely misguided, raise their children better than a lab. However, our kids are wasteful and consumptive and are plagued by FOMO so I guess parents are really not doing any different than in the book. Mostly (and probably by design) this story made me uncomfortable and I didn't like anyone. I hope I am more a "John Savage" person who romance and suffering then Lenina and her careless, entitled lifestyle. But I am probably both - I do love a hot bath and a cheesy movie.