Theater Posters of James McMullan, The 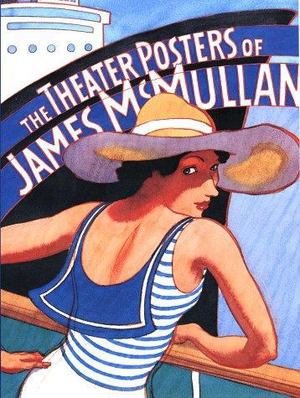 James McMullan, Bernard Gersten (Introduction by), John Guare (Foreword by)
On buses, billboards, and train platforms, in newspapers and magazines, a poster's swift promise in glorious color or powerful dark tones offers a vivid impression of what awaits a theatergoer, and provides the lasting mental image of a play long after its closing night. No one creates such images with more invention, honesty, and beauty--sometimes disturbingly, but always memorably--than James McMullan.The Theater Posters of James McMullan is an illuminating collection of thirty-six posters from 1976 to the present (from Arcadia and Carousel to Six Degrees of Separation), almost all of them for New York's Lincoln Center Theater, by this artist for whom "the body itself becomes a quickly understood gesture like the movement of a mime or a dance." The ragman hanging off the lamppost with his flaming match in Road, the French-postcard wink of the Anything Goes woman, Eros aiming his arrow in Four Baboons Admiring the Sun . . . full-page reproductions of McMullan's posters accompany his stories of their geneses. Reference photographs, sketches, and alternate versions illustrate his search for the perfect visual metaphor. Most of all, the personalities and dramas of the theater people who surrounded each poster's birth--from Wole Soyinka and John Guare to Liv Ullmann, Patti LuPone, and Mike Nichols--fill this gift book of choice for all theater and art lovers.