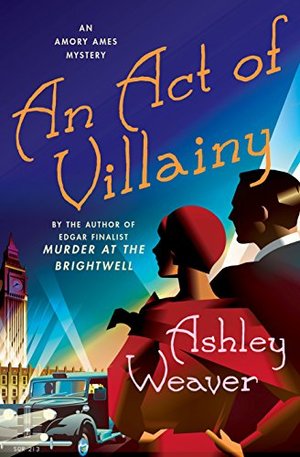 Ashley Weaver
Edgar Award-shortlisted author Ashley Weaver returns with the fifth installment in the Amory Ames mystery series. An Act of Villainy is an a gem, set in 1930s London and filled with style, banter, and twists that traditional mystery fans will positively relish."So you've gotten yourself involved with another murder, have you?"Walking through London’s West End after a night at the theater, Amory Ames and her husband Milo run into wealthy investor and former actor Gerard Holloway. Holloway and his wife Georgina are old friends of theirs, and when Holloway invites them to the dress rehearsal of a new play he is directing, Amory readily accepts.However, Amory is shocked to learn that Holloway has cast his mistress, actress Flora Bell, in the lead role. Furthermore, the casual invitation is not what it seems―he admits to Amory and Milo that Flora has been receiving threatening letters, and he needs their help in finding the mysterious sender. Despite Amory’s conflicting feelings―not only does she feel loyalty to Georgina, but the disintegration of the Holloways’ perfect marriage seems to bode ill for her own sometimes delicate relationship―her curiosity gets the better of her, and she begins to make inquiries.It quickly becomes clear that each member of the cast has reason to resent Flora―and with a group so skilled in the art of deception, it isn’t easy to separate truth from illusion. When vague threats escalate, the scene is set for murder, and Amory and Milo must find the killer before the final curtain falls.Also out now in the Amory Ames mysteries: Murder at the Brightwell, Death Wears a Mask, A Most Novel Revenge, and The Essence of Malice.