C.A.I.R Is Hamas: How the Federal Government Proved that the Council on American-Islamic Relations is a Front for Terrorism (Archival Series) (Volume 3) 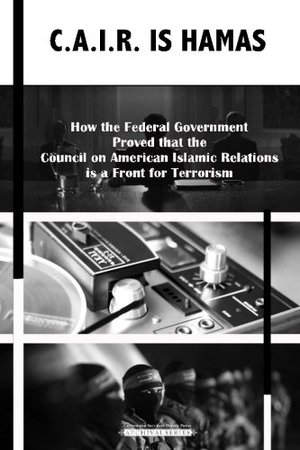 Center for Security Policy
On an October day in 1993, men from around the country had gathered together in the meeting room of a Philadelphia Hotel. They came from different places and they worked in different fields but they all had one thing in common. Membership in a covert organization, known as the Palestine Committee, with a single goal, to do whatever it took to support Hamas, a group formed by the secretive Muslim Brotherhood to wage a violent jihad against Israel and the Jewish people. Since it’s founding the Palestine Committee had committed itself to raising millions of dollars for, and spreading propaganda on behalf of, Hamas in the United States. The members of the Palestine Committee feared that the signing of the Oslo Accords would soon lead the U.S. government to designate Hamas as a terrorist group. They knew that to continue their work, they would need help. A new organization, designed to defend their interests, push their message and keep law enforcement off their back. That organization would come to be called the Council on American Islamic Relations, or CAIR. But there was one thing the members of the Palestine Committee didn’t know. The FBI was recording every word they spoke as they conspired. The transcripts of the infamous so-called “Philly Meeting” would become key primary evidence in the Holy Land Foundation Trial, the massive Hamas terror finance trial that would lead to convictions on all 108 charges against key Hamas financiers. The federal judge in that trial would rule that the government provided “ample evidence” for associating CAIR with Hamas, and for its status as an unindicted co-conspirator in the Holy Land Foundation case. This book features original Holy Land Foundation trial testimony of FBI agent Lara Burns as she walks acting district attorney Barry Jonas through the events leading up to, and during this historic moment in counterterrorism. Annotations from the Center’s experts as well as excerpts from key sections of the infamous wiretaps supplement the trial testimony. The Archival Series is an effort by the Center for Security Policy to provide policymakers and the general public access to the original source documents that form the basis for understanding the nature of the Muslim Brotherhood’s operations in the United States.