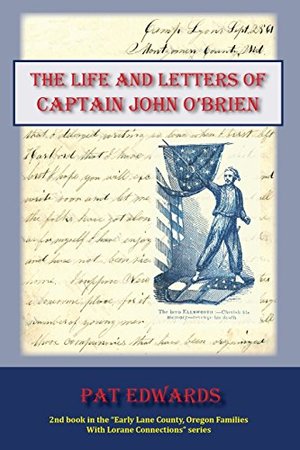 Pat Edwards
In 1873 and 1874, after serving four years as a Union soldier in the Civil War, Captain John O'Brien homesteaded 160 acres of land south of Lorane, Oregon in what is now the Letz Creek Road area. The Homestead Act of 1862 provided free land to veterans who had served in the Civil War as well as others who qualified. However, Capt. O'Brien didn't live there full time until 1907, when he retired as the President of the Multnomah Typographical Union #58 and stepped down from the International Federated Trades Assembly of Portland in which he took an active role for many years. It was obvious that Capt. O'Brien loved his farm. He spent as much time there as possible, using it as a retreat from the rigors of running a trade union and a daily newspaper in the big city. His story is rich in texture. A printer by trade, he was a man who lived his life as a leader, but proved also to be a gracious and gentle man. Much of the time he spent as a Union soldier during the Civil War, first as a private and eventually being promoted through the ranks to captain by brevet, is recorded in his own hand from the almost 50 letters he wrote to a favorite cousin throughout his four years of service. After leaving the military at the end of the Civil War, he took up the cause of the men who worked in the trades--especially the printing trade--and he became deeply involved in setting up trade unions to make sure that the workers who mainly used their hands and training in helping to build America were treated fairly and provided a living wage for their families. That vocation took him far from his Connecticut upbringing, first to Helena, Montana, then to Sacramento, California and soon San Francisco where he married his wife, Julia. He then settled in Portland, Oregon where he continued to champion the cause of the working man. He was a man of substance and from the stories told about him in the Lorane area, especially, he was loved and respected by his neighbors, as well. This book is the second in a series that showcases the lives of some of the very interesting early settlers in Lane County who had direct connections to the Siuslaw Valley and Lorane, specifically.