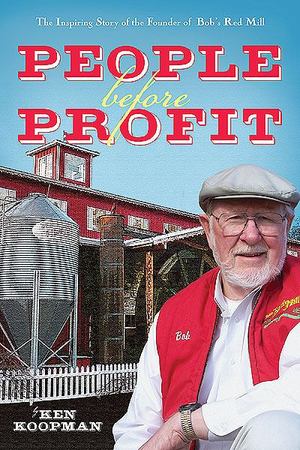 Ken Koopman
In an era of corporate greed, Bob Moore¿s philosophy of putting people before profit is a shining example of what¿s right about America. Instead of selling out to numerous bidders who would have made him a very wealthy man, the founder of Bob¿s Red Mill Natural Foods gave the $100 million company to his employees. Bob Moore¿s gift on Feb. 15, 2010 (his eighty-first birthday) gave hope to an American workforce rocked by a decade of CEOs behaving badly. The national media heralded the announcement as the ¿feel good story of the recession.¿ It was an example of a return to ethics in the workplace, but as the legions of fans of Bob¿s whole grain natural products would argue, ethics and a sense of corporate responsibility didn¿t ¿return¿ to Bob¿s Red Mill, they never left. Most 60-year-old men who saw their business destroyed in an arson fire might have quit or faded away into retirement. Not Bob. After his wooden flour mill burned to the ground in 1988, he considered the seventeen employees who counted on him for their livelihood, and started over. He rebuilt, and flourished. He grew the company to become the nation¿s leading manufacturer of whole grain natural foods. Bob¿s is an amazing story of overcoming challenges and making great comebacks. His wife, Charlee, was the inspiration to feed the family healthy natural foods, but it was a divine appointment with a random library book titled John Goffe¿s Mill that began Bob¿s love affair with the ancient art of milling, using stone wheels to slowly grind grains into nutritious whole wheat flours, cereals, and mixes. His unconventional thinking and passion for healthy living is an inspirational story for readers of all ages.