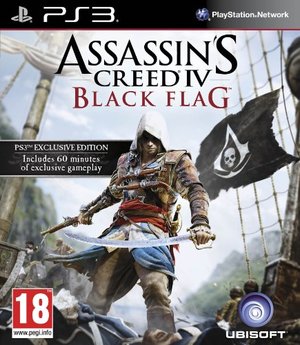 PlayStation 3
THE GOLDEN AGE OF PIRATESAssassins Creed IV Black Flag begins in 1715, when pirates established a lawless republic in the Caribbean and ruled the land and seas. These outlaws paralyzed navies, halted international trade, and plundered vast fortunes. They threatened the power structures that ruled Europe, inspired the imaginations of millions, and left a legacy that still endures.EDWARD KENWAYInto this world sails a young, cocky, and fearsome captain named Edward Kenway. His skill with a sword and disdain for authority earn him the respect of pirate legends like Blackbeard, but thrust him into an ancient conflict that threatens to destroy everything the pirates have built.THE CARIBBEAN AT THE DAWN OF THE 18TH CENTURYDiscover the fullest Assassins Creed world ever created. Stand among legendary pirates such as Blackbeard, Calico Jack and Benjamin Hornigold, as you establish a lawless republic in the Bahamas and relive the truly explosive events that defined the Golden Age of Pirates. From Kingston to Nassau, explore 50 unique locations where you can live the life of a pirate. Captain and customize your own ship, search for lost treasure, hunt rare animals and loot underwater shipwrecks.