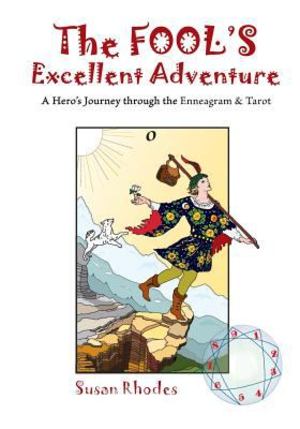 Susan Rhodes
The Fool's Excellent Adventure: A Hero's Journey through the Enneagram and Tarot is the first book to explore the relationship between two great systems: the tarot and the enneagram. The tarot provides us with images that can spark our creative imagination. The enneagram allows us to access the gifts of the nine personality types. Used together, they help us to re-imagine the world as a place of magical significance in which each of us has a unique role to play and a unique purpose to accomplish. The hero's journey depicted here is based on Joseph Campbell's mythic vision and Carl Jung's transformational approach to psychology. Two decades ago, in his book Tarot and the Journey of the Hero, Hajo Banzhaf used the hero's journey to develop a tarot model describing the symbolic role of the 21 cards in the major arcana. He depicted the first nine cards as the Arc of the Day (nine archetypal approaches to life), the second nine as the Arc of the Night (nine challenges associated with "shadow work"), and last three as the Goal state (representing the reconciliation of the opposites within our nature). There is one card left over: The Fool. This card depicts each of us as we move through life, never sure of what we'll find around the next bend! Using Pythagorean number symbolism, it's possible to match up the nine enneagram types with the nine paths envisioned by Banzhaf. The only thing missing is a complete Arc of the Goal (one with nine cards instead of three. This book shows what a complete Arc might look like by adding six new archetypal images, thus creating 27-card symbolic tarot. Such an enneagram-informed model allows the traditional symbolism of the tarot to be informed by the relational wisdom of the enneagram. You don't need to know the tarot or enneagram to use this book. The Fool's Excellent Adventure is intended for anyone with an interest in the tarot, the enneagram, or adventurous self-discovery. Additional topics: Discovering your Enneagram Type; Using the Enneagram in Tarot Divination; Using the Tarot to Re-discover the Enneagram; Enneagram-based Tarot Spreads; The Minor Arcana and the Enneagram; Applying the 27-Card Model with a Conventional Tarot Deck; The Transformational Implications of The Fool's "Quantum Zero"; The Animating Spirit of Hermetic Philosophy; The Role of the Enneagram in the Western Mystery Tradition; The Relationship between the Tarot, Enneagram and Qabala; Linking the Enneagram and Qabala through Sacred Geometry; and The Implications of the Golden Dawn's Tarot Attributions.