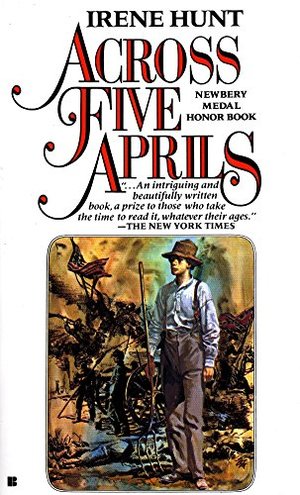 Irene Hunt
The unforgettable story of young Jethro Creighton who comes of age during the turbulent years of the Civil War.

The unforgettable story of young Jethro Creighton who comes of age during the turbulent years of the Civil War.  Shots fired far away spark a civil war that will have painful repercussions for an Illinois family. This book shows how war affects ordinary people and changes their lives forever. Effectively exploring the complex issues behind the war, Irene Hunt's well-researched historical tale is captivating and memorable.  Irene Hunt has created an engaging novel that vividly depicts the grand scope of the Civil War, while also showing its intimate impact on the lives of ordinary families. She draws from stories told by her grandfather, family letters, and historical research. In an eloquent but often folksy style, Hunt draws the reader into the farming life of southern Illinois, where young men see a chance to prove their manhood and speak of the war as being fun. Through the four long years of war, Jethro discovers the truth, with the death of one brother and the virtual loss of another when he chooses to fight for the Confederacy.

This is also a novel of a mother sending her children off to war, of a wife raising two children on her own, of a young woman facing the prospect of losing the man she loves. Brilliantly representing the passionate feelings of both sides in the Civil War, Hunt brings the reader to a fuller understanding of this conflict, showing both the futility of war and the breadth of its human consequences.