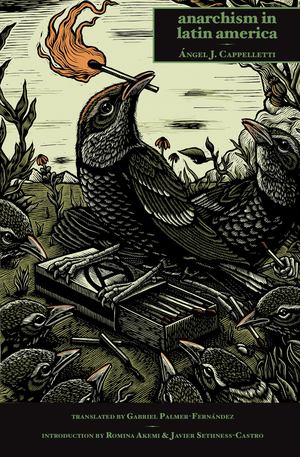 Ángel J. Cappelletti, Gabriel Palmer-Fernandez (Translator)
The available material in English discussing Latin American anarchism tends to be fragmentary, country-specific, or focused on single individuals. This new translation of Ángel Cappelletti's wide-ranging, country-by-country historical overview of anarchism's social and political achievements in fourteen Latin American nations is one of the few book-length regional histories ever published in English. With a foreword by the translator. Ángel J. Cappelletti (1927-1995) was an Argentinian philosopher who taught at Simon Bolivar University in Venezuela. He is the author of over forty works primarily investigating philosophy and anarchism. Gabriel Palmer-Fernandez is Distinguished Professor of Philosophy and Religious Studies at Youngstown State University.

@ralowe
Reviewed: 2020-05-21
enthralling. NOT! see, this is the reason nobody fucks with anarchists. plz no disrespect to historian and philosopher angel j. cappelletti's work that went into researching this: an equal amount of work went into making it boring as hell. how is this so boring? thinking i'd learn about the anarchistic indigenous practices of south and central america the book remains focussed on anarchism as a eurocentric political self-categorization, rather than a relational tendency, immigrating into a range of countries that starts with argentina and ends with mexico. does anyone know why the book's sequence was chosen? written so boringly cappelletti reads old, overly classical in how it presents historical material; *anarchism in latin america* would be cappalletti's final work, the glorious capstone to a massive career. sometimes it feels like he barely actually cares. page 151: "Anarchist groups seemed to have played an important role in the great boaters' strike in Iquique, which later spread to Antofagasta, Valparaiso, Concepcion, and other places. The strike concluded in June of 1890 with a mass slaughter in Iquique. In early 1900 in Santiago, a Centro de Estudios Sociales Obrero was formed; university students there founded the group La Revuelta with the aim..." who cares about the fucking students; you said a "mass slaughter" happened? yikes! what happened? how many were slaughtered? i could only find iquique mentioned again only once on page 159 in the rest of the chile chapter, when "rebacarren" [sic, luis emilio recabarren (translators maybe?)] founded a socialist party there in 1912. and there is no entry for iquique in the index. *anarchism in latin america* itself works best as an index for independent research. there's a massive timeline at the end of the book. romina akemi and javier sethness-castro do a kind introduction very gently letting on to the shortcomings; a better version of the book would be these two working through cappelletti's research and basically re-organizing everything for human consumption. if you're already initiated into the anarcho-boysclub and aleady know a thing or two about emiliano zapata's plan of ayala and how it relates to calpulli from precolumbian aztec society then this book's for you. those are all things i would expect to learn more about in detail from this book. oh well. cappelletti plows through the plot and lists of people, organizations and so on on record with very little context or embellishment and keeps it movin'. so-and-so stroke against the bosses got jailed and died the end. at the same time the insane amount of dedication and research this book represents is fucking mindblowing. there's no hook but a metric shit ton of data. here's hoping it's the start of a deeper and more thorough explanation of, well, anarchism in latin america"_
Item Posts
No posts
© 2020 libib.com / All rights reserved