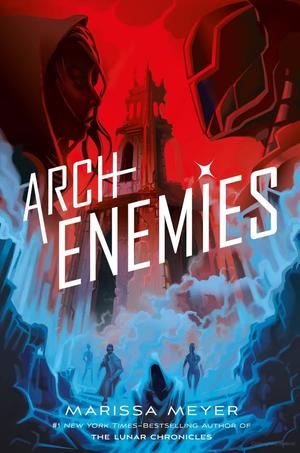 Marissa Meyer
The Renegades Trilogy continues, in this fiercely awaited second installment after the New York Times-bestselling Renegades by Marissa Meyer, author of the Lunar Chronicles. Time is running out. Together, they can save the world. But they each other’s worst nightmare. Nova’s double life is about to get a lot more complicated: As Insomnia, she is a full-fledged member of the Renegades, a syndicate of powerful and beloved superheroes. She works with Adrian’s patrol unit to protect the weak and maintain order in Gatlon City. As Nightmare, she is an Anarchist - a group of of villains who are determined to destroy the Renegades. Nova wants vengeance against the so-called heroes who once failed her when she needed them most. But as Nova, her feelings for Adrian are deepening, despite the fact that he is the son of her sworn enemies and, unbeknownst to Nova, he has some dangerous secrets of his own. In this second installment of the Renegades trilogy, Nova, Adrian, and the rest of their crew – Ruby, Oscar, and Danna -- are faced with escalating crime in Gatlon City, while covert weapons and conflicting missions have Nova and Adrian questioning not only their beliefs about justice, but also the feelings they have for each other. The line between good and evil has been blurred, but what's clear to them both is that too much power could mean the end of their city – and the world – as they know it.

@torykohrin
Reviewed: 2021-05-22
What would you get if you loved up YA romance with urban fantasy/superhero world? Well, something exactly like this.

Now, I read the first book like... a long, pretty much very long time ago (it was 2 years which is forever in book world when you are used to read the whole series at "one sitting"). I mean, I read Lunar Chronicles and gave it all five stars. All. Four of them. Giving a book 5 stars right now? That happens... almost never. A few times a year. So to say my tastes and everything change would be a huge understatement. And hey, other things changed too. The cover, for example, was given a new style that I totally dig.

I read the first book. And I was awe-struck and decided not to wait for the second book - but for the third one! Funnily enough, that might or might not have been a mistake.

Because now I had to actually re-read it to remind myself what it was actually about.

At first, I was getting excited - "Wasn't this supposed to be YA? (I really dislike YA) Doesn't feel that way. I'd even say it's NA. In the best way possible. And not like it was getting terribly impressive but whoa, this is cool. And he has two dads? I totally forgot! Wish I knew their story!". And then, of course, Nova and Adrian happened. And I realized exactly why it's fair and really appreciated I have been warned. If the awkward, morally questionable (which makes it even more) palm-face-inducing romance was taken or transformed... let's just say I'd give no complaints.

We have a world of superheroes and the world of villains. Quotation marks. We have Nightmare and Insomnia. Sketch and Sentinel. And we have this impressive superhero world - and we have romance. That, for me, are two different worlds making me feel very different feelings.

Some things did feel a little... well, either they were a sign of a certain genius and some effort to be deep (so deep you could discuss this book in your English class to get to the bottom of it) because Heroes? Villains? Felt totally the same to me. If in nothing else, then simply compared to Nova and Adrian. I do so dislike it when the only two people that speak sense are two characters. In a multi-character book. It's very frustrating that the only people I could feel I could really respect were the two lovebirds and because of their romance, that was also not that easy.

Good guys being so self-righteous they start to be the thing they fight against? Bad guys just being stereotypically bad and making problems? No one felt wholly... real. They were almost archetypes. Ace being like a broken record, Hugh and Simon spouting Code like Bibble verses... and it would not be so ridiculous if it was not for Nova that spoke such a profound and eye-opening TRUTHS than the rest of it felt frustrating. Like - can't you see those two kids are right? That what all of you - the rest of you - are doing - you're doing it wrong?!

Thankfully, the only other was this felt like YA was the constant nagging. Because they are kind of kids and Adrian has parents and Nova has her gang so it was all "where have you been? what have you been doing? I don't know what you were doing these last thirty seconds! You must tell me in all the excruciating details!". The limited freedom YA characters enjoy feels, right now, to me, stifling and frustrating. So getting their plans foiled because they are young and they have to attend some party or their parental figure said not to do something? When they were both doing stuff they were not supposed to but still get bossed around? Not my favourite part.

That would probably be the abilities building and maybe the history of the world part. Because making up all those abilities? NOT EASY. I kind of want to write a superheroes novel, even started the first chapter and I have some abilities but the author didn't pull her punches and made everything possible. I always tried to think of things that could actually work and could be, in theory, explained by science. Not here and it gave the story a real edge. The same for history. It is a little... short, like, for most of history, people with powers were treated worse than witches during the Inquisition. Some 20 or 30 years ago, a guy decides ha had enough of that attitude. And we got 10 or 20 years of chaos and society collapsing and now 8 or 10 years society getting "better". Except they seem like 50% old society and 50% mindless drones that worship Renegades. At least from Nova's POV.

It might even strike as so unrealistic. Society hated special people but now that they "saved" them from themselves - their own nature to exploit one another in the ensuing chaos Ace created - suddenly they are okay to rely on them for: health, safety, food, government... basically everything. I know humanity is lazy but this seems extreme even for us. (Another point in "this is so deep it's practically compulsory reading" strategy.) Like when you drive your point to the point of absurdity to reveal something true and profound in an enlightening way.

Overall, I have outgrown this kind of story but there were still things I enjoyed and honestly, if only for the sentimental value? Four stars.
Item Posts
No posts
© 2022 libib.com / All rights reserved