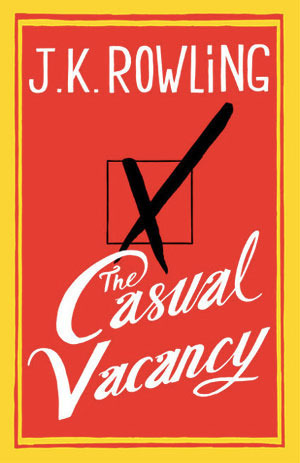 J.K. Rowling
When Barry Fairbrother dies unexpectedly in his early forties, the little town of Pagford is left in shock. Pagford is, seemingly, an English idyll, with a cobbled market square and an ancient abbey, but what lies behind the pretty façade is a town at war. Rich at war with poor, teenagers at war with their parents, wives at war with their husbands, teachers at war with their pupils…. Pagford is not what it first seems. And the empty seat left by Barry on the town’s council soon becomes the catalyst for the biggest war the town has yet seen. Who will triumph in an election fraught with passion, duplicity and unexpected revelations? Blackly comic, thought-provoking and constantly surprising, The Casual Vacancy is J.K. Rowling’s first novel for adults.

@gracelv1395
Reviewed: 2021-06-21
I'll admit, this book is very slow going at the start. Rowling takes her sweet time introducing you to the characters, and all of them are so dysfunctional that I got to page 100 still not having a good grasp on who was who. The second half though, picks up quite a bit. I ended up finishing the last 150 pages in one sitting (and stayed up half the night doing so).

Overall, I'm still not sure what I think of this book. I certainly found most, if not all, of the characters compelling and became very invested in their stories. This definitely isn't a feel-good book though. The picture Rowling paints is a bleak one, and the tentatively hopeful ending is heavily outweighed by all the dark shit that comes before it. Ultimately, it's just that there didn't seem to be any real reason for all that darkness. What's the point of it all? The only character that seems to have any change of character or face any repercussions for their actions starts out as a literal sociopath. What is Rowling trying to say with all this? Life sucks and then you die?

Anyway, it's certainly not a bad book by any means. Just an infinitely depressing one.
@bucherca
Reviewed: 2021-01-10
Deeply moving novel about children and their parents and about class attitudes in society.
@jfinkreads
Reviewed: 2020-06-02

The author of the Harry Potter series wrote her first novel for an adult audience. It is quite a bit different from what her audiences are used to, but her writing talent is as sharp as ever.

@coffeymuse
Reviewed: 2018-02-24
I love the author and was willing to give this a shot. Page 117 and I haven't picked this up in a day, it's mocking me sitting there on the coffee table. The book knows I don't want to read it, that I feel like I should be forcing myself to read it because it's JK Rowling!

But guess what, the British location, the plot that doesn't move (who gets the dead guys seat on the government council and what secrets will be unveiled)and way too many characters to keep clear in my head are all conspire against me. It's a busy fall season with lots of books coming out that I want to read, that I just can't make myself read the new one by Ms Rowling.