Blade So Black, A 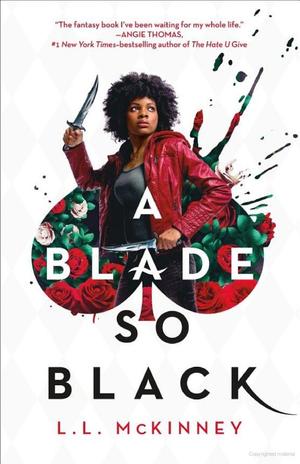 L.L. McKinney
"With memorable characters and page-turning thrills, A Blade So Black is the fantasy book I've been waiting for my whole life. Alice is Black Girl Magic personified." —Angie Thomas, #1 New York Times-bestselling author of The Hate U Give A Blade So Black delivers an irresistible urban fantasy retelling of Alice in Wonderland . . . but it's not the Wonderland you remember. The first time the Nightmares came, it nearly cost Alice her life. Now she's trained to battle monstrous creatures in the dark dream realm known as Wonderland with magic weapons and hardcore fighting skills. Yet even warriors have a curfew. Life in real-world Atlanta isn't always so simple, as Alice juggles an overprotective mom, a high-maintenance best friend, and a slipping GPA. Keeping the Nightmares at bay is turning into a full-time job. But when Alice's handsome and mysterious mentor is poisoned, she has to find the antidote by venturing deeper into Wonderland than she’s ever gone before. And she'll need to use everything she's learned in both worlds to keep from losing her head . . . literally. Debut author L.L. McKinney delivers an action-packed twist on an old classic, full of romance and otherworldly intrigue. An Imprint Book "I loved the 'our world' framing and the 'other world' adventure so deeply. They were at such odds, but the overall effect was just chefkiss.gif perfect." —E.K. Johnston, #1 New York Times-bestselling author of Star Wars: Ahsoka and A Thousand Nights "Wholly original and absolutely thrilling—A Blade So Black kicks so much (looking gl)ass." —Heidi Heilig, author of The Girl From Everywhere "Mixing elements of Alice in Wonderland and Buffy the Vampire Slayer... a delectable urban twist on beloved fairy tales." —Entertainment Weekly * "An explosive, kickass debut ... the Alice in Wonderland retelling the world has always needed." —Booklist, starred review "A thrilling, timely novel that ensures readers will be curiouser for a sequel." —Kirkus Reviews "With a modern flair, a rich backstory, and just enough emotional heft, this particular looking glass will have readers eagerly falling through it." —Bulletin of the Center for Children's Books "McKinney has infused this urban contemporary retelling of Lewis Carroll’s classic Alice’s Adventures in Wonderland with a Buffy the Vampire Slayer sensibility and 'Black Girl Magic.'" —School Library Journal

This isn't the typical Alice in Wonderland inspired work. I found this YA novel thrilling. I listened to the audiobook on double speed, because I was too excited to listen to it at my usual 1.5x. After losing her father, Allison (Alice) is attacked by a physical manifactation of a nightmare and saved by mysterious man. Three months later, Alice has finished her training to start fighting the nightmares herself which have been popping up in Wonderland more often than usual. A Blade so Black is the first in the Nightmareverse series. The second and third are already published, so I'm going to be reading those soon. I would recommend this to readers who enjoy action and fantasy.