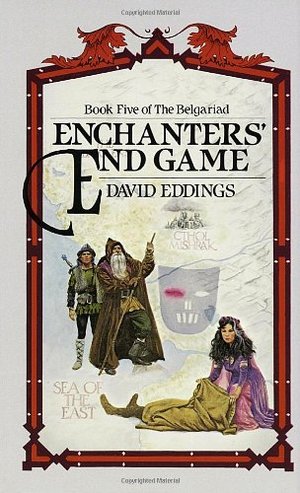 David Eddings, Leigh Eddings
THE DRIVE OF PROPHECY The quest was over. The Orb of Aldur was restored. And once again, with the crowning of Garion, there was a descendant of Riva Iron-grip to rule as Overlord of the West.But the Prophecy was unfulfilled. In the east, the evil God Torak was about to awaken and seek dominion. Somehow, Garion had to face the God, to kill or be killed. On the outcome of that dread duel rested the destiny of the world. Now, accompanied by his grandfather, the ancient sorcerer Belgarath, Garion headed toward the City of Endless Night, where Torak awaited him.To the south, his fiancée, the princess Ce'Nedra, led the armies of the West in a desperate effort to divert the forces of Torak's followers from the man she loved.The Prophecy drove Garion on. But it gave no answer to the question that haunted him: How does a man kill an immortal God?Here is the brilliant conclusion to the epic of The Belgariad, which began in Pawn of Prophecy--a novel of fate, strange lands, and a Prophecy that must be fulfilled--the resolution of the war of men, Kings, and Gods that had spanned seven thousand years!