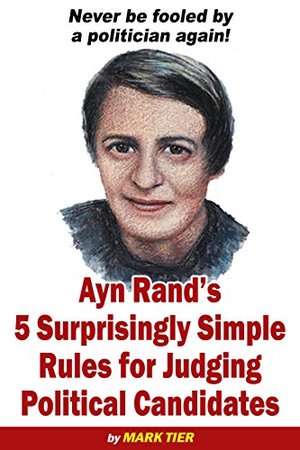 Mark Tier
Ayn Rand on . . . Ronald Reagan— “That so-and-so, claiming to be a defender of capitalism and Americanism, has come out against abortion. If he doesn’t respect so fundamental a right, he cannot be a defender of any kind of rights." That’s what Rand said about Ronald Reagan at the Ford Hall Forum in 1976. Reagan supported the right to abortion when he was governor of California—and later changed his tune. —or Mitt Romney? But those words apply equally to the 2012 Republican presidential candidate, Mitt Romney. As governor of Massachusetts he supported the right to abortion—and later changed his tune! So we can confidently conclude Rand would have the same “That so-and-so” opinion of Mitt Romney. Jimmy Carter— “[A] cheap, small town peanut power luster [who’s] been on both sides of every key issue.” —or Barack Obama? Rand’s opinion of Jimmy Carter applies equally to Barack Obama who, as president, broke most every election promise he made in the 2008 campaign—with one main exception. That was “Obamacare,” which Rand would have skewered with much the same words she used to tear apart George McGovern in 1972. These are just a few examples of Rand’s many statements we can adapt to current issues when the concrete referents are sufficiently similar. From her political writings we can also derive the “5 Surprisingly Simple Rules” she applied to judge politicians. When combined with her philosophy of Objectivism, we can have a pretty good idea what she’d probably say about today’s political issues—even though she died in 1982. In the following pages we’ll apply “Rand’s Rules” to the 2012 American Presidential election as a case study. And, in conclusion, you’ll learn how to apply those very same rules to parties and politicians everywhere. So whether you agree with Ayn Rand or not, you’ll never be fooled by a politician again.