Cat in the Hat, The 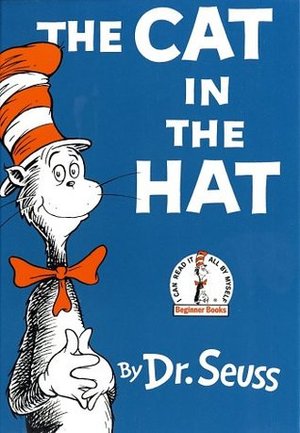 Dr. Seuss
There were two kids, Sally and Sam, whose mother was out. They were having a very dreary day, and then were graced with a surprise visit from a stranger, the Cat. He comes in, assures them their mom won't mind, and makes a very big mess. Before the Cat leaves, he cleans up his mess, and when Sam and Sally's mother returns home, nothing is amiss. The story ends with the question "What would YOU do, if your mother asked YOU?"

@cjs173355
Reviewed: 2020-03-25
PIC
@sellymeliana
Reviewed: 2018-06-02
Reviews taken from: https://www.commonsensemedia.org/book-reviews/the-cat-in-the-hat/user-reviews/adult
Children 4 and older will love it! The Cat in the Hat is very, very Educational! 5 Hats out of 5 for the Cat I love reading The Cat in the Hat to my 2 yr old. We have lots of fun reading through it. The first time through he thought it was too long, but now he asks for each each night before bed. I had previously thought he was zoning out during sections of the book, but a few days ago he was playing off by himself and talking to himself and I realized he was reciting part of the text from one of those sections! Others have expressed concern about the cat and the "things" as role models. You can't explain proper versus improper behavior without examples of the latter to counter with the former. The kids are mostly bystanders, who don't try to stop the cat or the things until pressed at the end. In the end, they take the right action. And, the cat himself, redeems himself to some degree by righting what he has done wrong. The story ends with a question -- that I believe -- is there for you to address when the story is presented and complete: When the mother comes home, should the kids tell her what happened while she was gone?

It's In The Hat A mother leaves her two children home alone and a stranger shows up and they start doing crazy things. For some people this will raise alarms, but in reality this isn't as bad as it seems. Children can tell the difference between an imaginary cat and some random stranger that shows up at the front door asking to be let in to play. The point is the funny rhymes as well as the funny things that the cat does an it is meant for good entertainment.

Awesome Book!!! This book is a true classic! It was totally awesome and mind blowing! To simplify it down, it’s about a cat who wears a hat, who trashes the house. He brings out these 2 boxes labeled Thing 1 and Thing 2. In the boxes are these crazy little people who trash the house even more, throwing stuff around like a game! But the cat in the hat cleans it up with a crazy awesome machine! He left as if nobody was ever there! And there’s a talking goldfish who says what’s right and wrong! That’s the main thing that goes down in the book. I would recommend that you! read this amazing book. It is a true inspiration to have! If you ever have a bad day or something, you can open up Cat In The Hat and gets many laughs. This book opened my eyes to books, and makes me want to read another by Dr. Suess. I recommend this book for all ages, not just to 4 years old, to ages 1-100!!!

BEST DR. SEUSS BOOK EVER!!! I don't really need to make a review on this because everyone knows that this is the best Dr. Seuss book ever made! It is a classic that kids and their parents will never forget! The cat may be a bad role model in the beginning, but at the end, he shows that he has a heart! Clever rhymes, nice pictures, and adorable characters makes this book memorable!

I really don't like this book! I know I'm going against decades of conventional wisdom but I won't read this book to my son. The Cat goes against every behavior I'm trying to teach him. The kids in the story are trying to do the right thing but the Cat just won't let them. I know it works out ok in the end but I see no reason to add this book to our library.

Wonderful classic for all ages
The cat is very naughty, but at least the kids and the fish are trying to do the right thing...

This is what started Dr. Seuss' fanbase. I LOVED this book as a toddler.This book is what encouraged me to take some time out of my day to read.The Cat In The Hat himself is hilarous as heck.The live-action movie on the other hand,is horrible.

Fun! Absolutley nothing to worry about! It's a classic!