If Dogs Could Talk 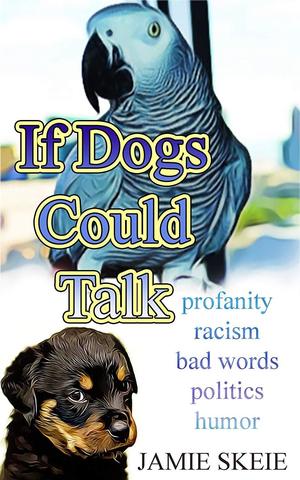 Jamie Skeie
If Dogs Could Talk was inspired by a real living parrot, named Orion. Orion is an African Grey Congo parrot. She has lived with the author, since she was three months old. She was 17 years old during the last year of having her words documented. Some things will be offensive to people. When you're reading her words..please don't take anything personal. You are seeing a real look into a parrot's vocabulary. For scientific reasons...the exact words she said, were documented, chronologically, from current to past.Jamie Skeie created a children's book series about Orion also. It's called, Orion the Star. She is featured in this book series as the superstar parrot, who flies from Orion's Belt, to save all creatures in distress. The first book in the series is called, Orion the Star: The Pink Dolphin.Orion learns new sentences everyday. This book was created to help other pet owners...know what their pets might be thinking! Animals are smarter than some people realize. After reading, If Dogs Could Talk, you'll feel closer to your loved ones You'll know what your pets would say..if they could talk!Orion has learned how to speak, without being given treats. She has learned naturally. Just like if you were to move to another country...and pick up on the language, from living there. This book proves an African Grey's intelligence..is the same as their age, in comparison to a human's age, and intelligence. Orion, at 17 years old, demonstrates the same cognitive, and speaking abilities as humans, the same age. And, she's more intelligent than most teenagers!