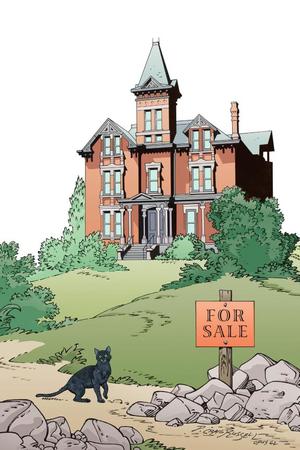 Neil Gaiman
When Coraline steps through a door in her family's new house, she finds another house, strangely similar to her own (only better). At first, things seem marvelous. The food is better than at home, and the toy box is filled with fluttering wind-up angels and dinosaur skulls that crawl and rattle their teeth. But there's another mother there and another father, and they want her to stay and be their little girl. They want to change her and never let her go. Coraline will have to fight with all her wit and all the tools she can find if she is to save herself and return to her ordinary life. This beloved tale has now become a visual feast. Acclaimed artist P. Craig Russell brings Neil Gaiman's enchanting nationally bestselling children's book Coraline to new life in this gorgeously illustrated graphic novel adaptation.

@virago
Reviewed: 2021-10-12
Wonderful. Whimsical with a slight hint of creepy. Coraline is a bright, adventurous child who doesn't get enough attention from her parents, but she's perfectly capable of occupying her time exploring. There is a cast of wacky characters, a key to a door that leads nowhere, and then somewhere. It becomes a doorway to another version of her world where the characters are twisted copies of the ones from her world. And the Other Mother, is clearly a creepy monster disguised as her mother to lure her into a false sense of security so she can eat her...probably. Most definitely. And EWWWW spiders! The artwork was wonderful and while I haven't read the original novel and cannot compare the adaptation to it, I think it's fantastically done. I've seen the movie so I had something to go on. And as with anything that features a sassy cat--or any cat--he was my favorite character! I very much enjoyed reading this.
@tmilano
Reviewed: 2019-09-10

Kind of creepy, and not as good as Sandman. It tries to be more of a children's story but too creepy for children. I also didn't like the art style much.