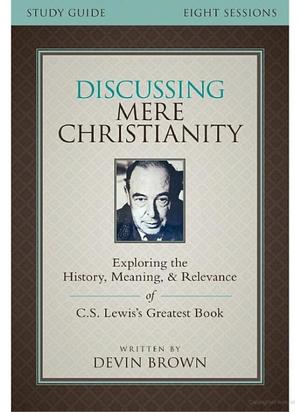 Devin Brown
In this eight-session video group study (DVD/digital video sold separately), you will discover why Mere Christianity by C.S. Lewis is one of the most read and beloved Christian books of all time. But seventy years later from when it was first delivered on radio, what relevance does it have to our world today? Host Eric Metaxas and a variety of Christian leaders−including Philip Yancey, Alister McGrath, Devin Brown, Paul McCusker, Douglas Gresham, and others−help us understand the timeless message of C. S. Lewis in fresh ways for a new generation. The first purpose of this video study is to explore the positive ideas that C.S. Lewis has so eloquently written about in Mere Christianity for those who already call themselves Christian. The second purpose is to explain in an engaging, winsome and non-threatening way the basic tenets of the Christian faith as illustrated by C.S. Lewis to those who do not claim to be Christian. This study aims to fulfill the vision of C.S. Lewis of reaching people from all faith backgrounds. Sessions include: Our Sense of Right and Wrong What's Behind Our Sense of Right and Wrong The Rival Conceptions of God Free Will and the Shocking Alternative Christian Behavior and the Great Sin of Pride The Christian Virtue of Hope God in Three Persons Counting the Cost Designed for use with the Discussing Mere Christianity Video Study 9780310699859 (sold separately).