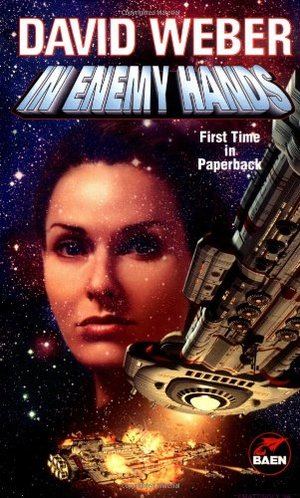 David Weber
Honor Harrington has faced ship-to-ship combat, assassins, political vendettas and duels. She's been shot at, shot down, and just plain shot; had starships blown out from under her, and made personal enemies who will do anything to ruin her, and she's survived it all. Now she finds herself on board a battlecruiser bound for a prison planet aptly named 'Hell' - and her scheduled execution. Put into solitary confinement, separated from her officers and her treecat Nimitz, and subjected to systematic humiliation by her gaolers, her future has become both bleak and short. Yet the one lesson Honor Harrington has never learned is how to give up ...

Book 7 of the Honor Harrington series by David Weber finds Honor with a new list of responsibilities resulting from her new rank, new ships, new family, and at least some foreshadowing of a new suitor.

In Enemy Hands starts with Honor making the trip back to Grayson with her new treecat family in tow. I love the series for the space battles, but to be honest my favorite character is Nimitz. I love that he plays a larger role in this book after kind of falling by the wayside in some of the last book.

The RMN and GSN are working together to setup the 8th Fleet with combined resources. Of course, before the entire fleet can get ready, they setup a smaller group for an escort mission to the Adler System, and that sets off the rest of the book as Honor finds herself in unfamiliar territory. I won't say anymore to avoid any spoilers.

I can't tell if the book started slow or if it was just the second half of the book was that fast paced to make the rest be perceived that way. I struggled through the first 300 pages over several days, and the last 350 were read in one night as I couldn't wait to see what Mr. Weber had in store for me next. The climax was second only to Flag in Exile as the best one of the series, and I am already flying through the next one, Echoes of Honor, to see where she is going and how she is going to get out of this one.