Hero of Ages: Book Three of Mistborn, The 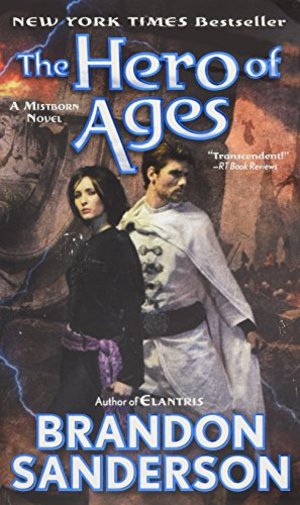 Brandon Sanderson
Who is the Hero of Ages?To end the Final Empire and restore freedom, Vin killed the Lord Ruler. But as a result, the Deepness---the lethal form of the ubiquitous mists---is back, along with increasingly heavy ashfalls and ever more powerful earthquakes. Humanity appears to be doomed.Having escaped death at the climax of The Well of Ascension only by becoming a Mistborn himself, Emperor Elend Venture hopes to find clues left behind by the Lord Ruler that will allow him to save the world. Vin is consumed with guilt at having been tricked into releasing the mystic force known as Ruin from the Well. Ruin wants to end the world, and its near omniscience and ability to warp reality make stopping it seem impossible. She can’t even discuss it with Elend lest Ruin learn their plans!The conclusion of the Mistborn trilogy fulfills all the promise of the first two books. Revelations abound, connections rooted in early chapters of the series click into place, and surprises, as satisfying as they are stunning, blossom like fireworks to dazzle and delight. It all leads up to a finale unmatched for originality and audacity that will leave readers rubbing their eyes in wonder, as if awaking from an amazing dream.

It wrapped up a great trilogy, which is always a challenge. Some of the sideplots were not as interesting or meaningful as the other books. I was also not completely satisfied with the ending for each of the characters but I still really liked the book. Very easy to get engaged with.

A good story with great concepts but could

have been edited more.