Alloy of Law: A Mistborn Novel, The 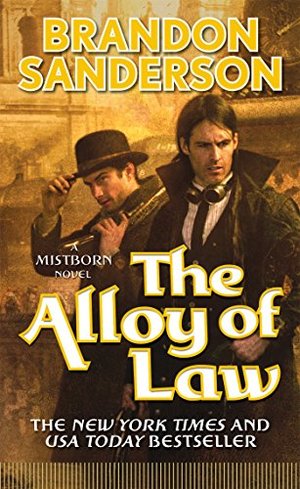 Brandon Sanderson
New York Times bestselling author Brandon Sanderson returns to the exciting world of the Mistborn in The Alloy of Law.In the three hundred years since the events of the Mistborn trilogy, science and technology have marched on. Scadrial is now on the verge of modernity, with railroads, electric lighting, and even the first steel-framed skyscrapers racing for the clouds.Yet even with these advances, the magics of Allomancy and Feruchemy continue to play a role in this reborn world. Out in the frontier lands known as the Roughs, they are crucial tools for those attempting to establish order and justice.One is Waxillium Ladrian, a rare Twinborn who can Push on metals with his Allomancy and use Feruchemy to become lighter or heavier at will. After twenty years in the Roughs, Wax must now put away his guns and assume the duties incumbent upon the head of a noble house—until he learns the hard way that the mansions and elegant tree-lined streets of the city can be even more dangerous than the dusty plains of the Roughs.

This is a long short story featuring Sanderson's Allomancy in a late Victorian period with a bit of western thrown in. The main character also is some kind of a gun-slinging Sherlock Holmes, really refreshing.

The only real downside is the length of the novel. Everything's masterfully done but it's over all too soon and it leaves the reader wanting more. Since this book was planned as a stand-alone I really didn't like that I had to leave the characters behind me in such a state.

Luckily, Sanderson rectified that "problem" by announcing a sequel on August 1, 2012. So there's nothing wrong with this book. Rejoice!