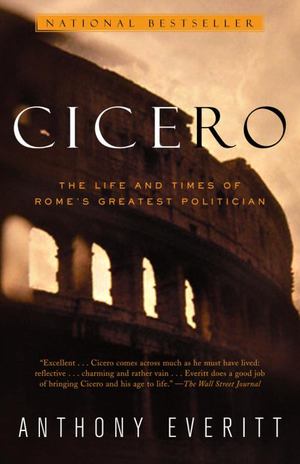 Anthony Everitt
NATIONAL BESTSELLER * "An excellent introduction to a critical period in the history of Rome. Cicero comes across much as he must have lived: reflective, charming and rather vain."--The Wall Street Journal "All ages of the world have not produced a greater statesman and philosopher combined."--John Adams He squared off against Caesar and was friends with young Brutus. He advised the legendary Pompey on his botched transition from military hero to politician. He lambasted Mark Antony and was master of the smear campaign, as feared for his wit as he was for his ruthless disputations. Brilliant, voluble, cranky, a genius of political manipulation but also a true patriot and idealist, Cicero was Rome's most feared politician, one of the greatest lawyers and statesmen of all times.  In this dynamic and engaging biography, Anthony Everitt plunges us into the fascinating, scandal-ridden world of ancient Rome in its most glorious heyday--when senators were endlessly filibustering legislation and exposing one another's sexual escapades to discredit the opposition. Accessible to us through his legendary speeches but also through an unrivaled collection of unguarded letters to his close friend Atticus, Cicero comes to life as a witty and cunning political operator, the most eloquent and astute witness to the last days of Republican Rome. Praise for Cicero " [Everitt makes] his subject--brilliant, vain, principled, opportunistic and courageous--come to life after two millennia."--The Washington Post " Gripping . . . Everitt combines a classical education with practical expertise. . . . He writes fluidly."--The New York Times "In the half-century before the assassination of Julius Caesar . . . Rome endured a series of crises, assassinations, factional bloodletting, civil wars and civil strife, including at one point government by gang war. This period, when republican government slid into dictatorship, is one of history's most fascinating, and one learns a great deal about it in this excellent and very readable biography."--The Plain Dealer "Riveting . . . a clear-eyed biography . . . Cicero's times . . . offer vivid lessons about the viciousness that can pervade elected government."--Chicago Tribune "Lively and dramatic . . . By the book's end, he's managed to put enough flesh on Cicero's old bones that you care when the agents of his implacable enemy, Mark Antony, kill him."--Los Angeles Times