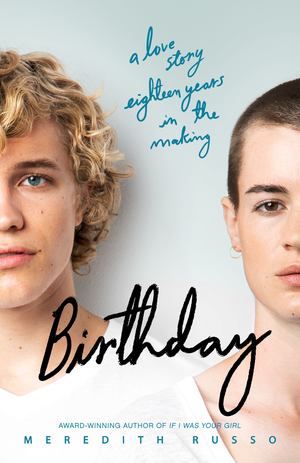 Meredith Russo
Two best friends. A shared birthday. Six years... ERIC: There was the day we were born. There was the minute Morgan and I decided we were best friends for life. The years where we stuck by each other's side--as Morgan's mom died, as he moved across town, as I joined the football team, as my parents started fighting. But sometimes I worry that Morgan and I won't be best friends forever. That there'll be a day, a minute, a second, where it all falls apart and there's no turning back the clock. MORGAN: I know that every birthday should feel like a new beginning, but I'm trapped in this mixed-up body, in this wrong life, in Nowheresville, Tennessee, on repeat. With a dad who cares about his football team more than me, a mom I miss more than anything, and a best friend who can never know my biggest secret. Maybe one day I'll be ready to become the person I am inside. To become her. To tell the world. To tell Eric. But when? Six years of birthdays reveal Eric and Morgan's destiny as they come together, drift apart, fall in love, and discover who they're meant to be--and if they're meant to be together. From the award-winning author of If I Was Your Girl, Meredith Russo, comes a heart-wrenching and universal story of identity, first love, and fate. "Beautifully written, Birthday is an altogether singular contribution to the gradually growing body of transgender literature and, indeed, to mainstream literature, as well." --ALA Booklist, starred review

Birthday follows two kids, Morgan and Eric, who have been best friends since the day they were born (their parents both stuck in the hospital for 3 days due to a snow storm when they were born). Meeting with both kids, once a year on their birthday, from ages 13-18, many changes happen. With Eric, he tries to figure out who is and how he fits into the world. With Morgan, she makes the difficult choice on how best to be true to herself. Over the years, the duo go through the roller coaster that is teenage life, coming together, drifting apart and ultimately, realizing just how close they really are to each other.

I read this book in only two settings (only because I started it pretty late on the first night). It's a fast, yet beautifully heartbreaking read about acceptance, love, grief, and everything else that stands in the way of finding yourself as a teenager. Meredith Russo open a window and gave me a look inside a life I have little knowledge about: being transgender.

I connected with both characters very quickly and wanted them both to succeed and be happy. I also had tears in my eyes when Morgan talked about her many struggles and fears.

The only downside would be that I am not a fan of the cover at all. I had it on my TBR shelf for a year and a half before I finally read it. Every once in a while I would do a "clean out" and I would re-figure out what it was about because the cover didn't feel like it matched up. Once I read the story, I get it, but otherwise it just doesn't stick out for me.