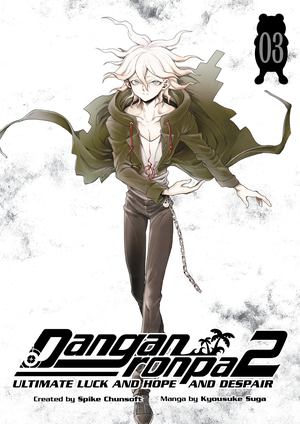 Spike Chunsoft, Kyousuke Suga (Illustrator), Jackie McClure (Translator)
The ultimate teenage murder game continues! Based on Danganronpa 2: Goodbye Despair, the sequel to the original Danganronpa, the manga series Ultimate Luck and Hope and Despair contains many scenes only hinted at in the game! The conclusion! Caught in the execution procedure by mistake, Fuyuhiko desperately requires emergency aid. Due to the school rules, Monokuma has no choice but to save Fuyuhiko's life. But never one to let an evil opportunity slip by, Monokuma uses the medical theme for his next murder motive: the Despair Disease! Everyone is terrified of catching the contagion after Nagito, Ibuki, and Akane become infected. The three are forced into quarantine, and Monokuma claims a corpse is required to produce a cure! But they can't kill someone to save themselves, can they...?