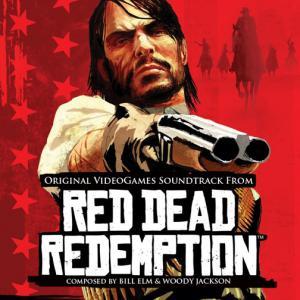 Bill Elm, Woody Jackson, José González, Jamie Lidell, Ashtar Command, William Elliot Whitmore
The Red Dead Redemption Official Soundtrack was released on May 18, 2010. It was published by Rockstar Games. The music was mainly composed by Friends of Dean Martinez member Bill Elm and ex-member Woody Jackson along with additional contributions from various musicians including Jamie Lidell, José Gonzáles, Ashtar Command, and William Elliot Whitmore. It is a compilation of 19 tracks totaling approximately 1:15:18. - The majority of the music seems to have been inspired by the music of Ennio Morricone, who did the soundtrack to all of Sergio Leone's westerns, an Italian director of many great films that included A Fistful of Dollars; For a Few Dollars More; The Good, the Bad, and the Ugly; and Once Upon a Time in the West. Morricone also provided scores to many other spaghetti westerns which seem to have inspired the Red Dead saga, such as The Big Gundown, The Mercenary, Companeros, and The Ringo movies amongst many, many others. - "Muertos Rojos" is Spanish for Red Dead. - All of the instruments were recorded individually in what are called "stems" at 130 beats per minute (bpm) in the key of A-minor. The game then mixes the stems based on the player's location and what action is occurring onscreen. - Unlike Rockstar's previous game, Grand Theft Auto IV, where music was incorporated via in-game radio stations, Red Dead Redemption contains only non-diegetic sound, meaning characters don't hear it. - In addition to CD and downloadable formats, Rockstar released a red vinyl (LP) version of the soundtrack as a collector's item through their Rockstar Warehouse online store. - Some of the themes from the soundtrack are also used, in modified form, on the Undead Nightmare Soundtrack. - The majority of songs on the soundtrack are instrumental except for the last four ("Far Away", "Compass", "Deadman's Gun", and "Bury Me Not On The Lone Prairie"). - All four songs containing vocals are used for emotional effect; "Far Away", when arriving in Mexico, and "Compass", "Deadman's Gun", and "Bury Me Not On The Lone Prairie", towards the end of the game. "Compass" plays when Marston gets the chance to go and see his family again, "Bury Me Not On The Lone Prairie" plays when John's grave is seen, and "Deadman's Gun" plays during the credits.