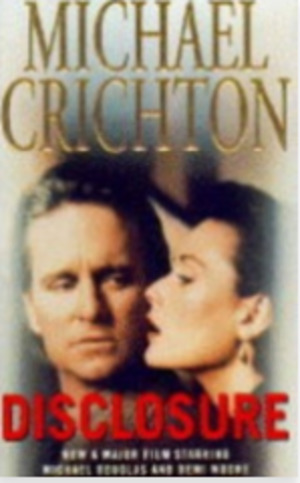 Michael Crichton
The thriller that opened a new chapter in the sex wars ...Thomas Sanders' world collapses in just 24 hours - he is passed over for promotion, his new woman boss comes on to him during a drink after work, then, the next morning, he learns that she has accused him of sexually harassing her. She demands his transfer, thereby threatening to cut him off from the millions he would have made when his high-tech company was floated on the stock market. What follow next made Disclosure the most talked about novel of the decade.

*** TRIGGER WARNING: sexual manipulation and harassment in the work place ***

Oh, I was so disappointed in this one. Normally, I have enjoyed stories by Michael Crichton but this one was just so awful. This one was solely based on characters desire's of moving up in an organization by sexualizing themselves and using their power of authority over others. I don't agree with that at all. The premise was general and there wasn't a lot of character building. The pacing was alright and I will say that the story did end in a way that justice prevailed but it wasn't enough to save the rating of this one. I feel as though I wasted my time. And for this I cannot recommend it.