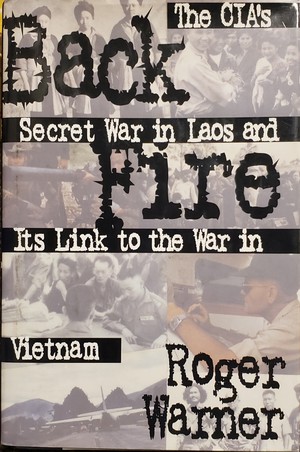 Roger Warner
This is the story of a hidden war between the US and the communist powers in the neutral country of Laos, which led to the Vietnamese War. This book offers a full account of this conflict, based on access to previously closed files and interviews with intelligence players, military officers and government officials. The narrative describes the key Americans who trained the Laotians peasants and tribal people and led them into battle. Hill tribesmen were taught how to fly planes and guerilla raids were planned by CIA officers from thatched huts in a war overseen by the US ambassador. The book also tells of the warring Laotian princes, the general who may have dabbled in the opium trade, and the CIA operative who raised an army of 30,000 hill tribesmen and beat back the communists until the US government bureaucracy took control of his war and tore the kingdom apart. This book aims to make the puzzle of the US war in Vietnam whole and reveals how an obscure people was set on the path of achieving national identity, only to be abandoned in the wake of America's escalating conflict in Vietnam.