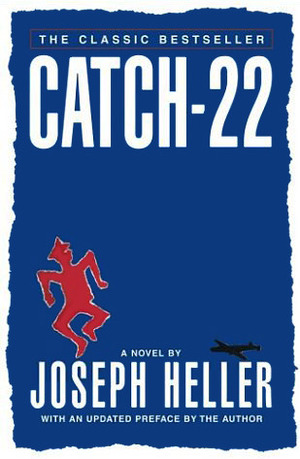 Joseph Heller
Catch-22 is like no other novel. It is one of the funniest books ever written, a keystone work in American literature, and even added a new term to the dictionary. At the heart of Catch-22 resides the incomparable, malingering bombardier, Yossarian, a hero endlessly inventive in his schemes to save his skin from the horrible chances of war. His efforts are perfectly understandable because as he furiously scrambles, thousands of people he hasn't even met are trying to kill him. His problem is Colonel Cathcart, who keeps raising the number of missions the men must fly to complete their service. Yet if Yossarian makes any attempts to excuse himself from the perilous missions that he is committed to flying, he is trapped by the Great Loyalty Oath Crusade, the hilariously sinister bureaucratic rule from which the book takes its title: a man is considered insane if he willingly continues to fly dangerous combat missions, but if he makes the necessary formal request to be relieved of such missions, the very act of making the request proves that he is sane and therefore ineligible to be relieved. Catch-22 is a microcosm of the twentieth-century world as it might look to some one dangerously sane -- a masterpiece of our time.

@alexbauman
Reviewed: 2019-11-21
It would be hard for me not to love a book as absurd and cynical as this one. The idiosyncrasy of the authorial voice strikes the reader quickly, but I was reminded of Tristram Shandy for some reason. Maybe the raunchiness, sarcasm, and the way the narrative flips the bird at chronology, at least until the last fifth of the book.
@fourfreedoms
Reviewed: 2019-05-17
I will have to reread this, since I remember this book as the origin of the phrase snafu, and found it depressingly realistic. Not so funny back then, but maybe now, 35 years later and having gotten out of the environment, perhaps I can enjoy this book. I should try.
@swfenton
Reviewed: 2019-01-12
read
@scaredofspiders
Reviewed: 2018-12-26
I was annoyed by this book, more often than not. I'm glad I stuck it out to the end, though. The story eventually stopped stroking itself and coalesced into an actual plot. At some point very near the end, the protagonist got to stop acting completely ridiculous and random. His actions started being plausible, his reactions to situations similarly reasonable. The conclusion was rewarding. I just wish I hadn't had to wade through so much stupid bullshit filler first.
No, I do not recommend reading this book. If you must crack its cover for some incomprehensible reason consider only reading the last 30%. You may not get all of the references nor know who all of the characters are but you will surely waste less time and patience.
Item Posts
@electricidiot2y 8mo
completed ... on 2018-05-07
@electricidiot2y 9mo
completed ... on 2006-06-26
@electricidiot2y 9mo
began ... on 2018-04-12
© 2021 libib.com / All rights reserved