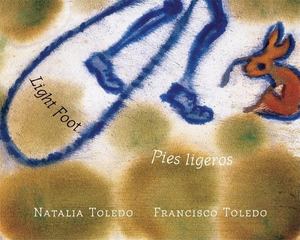 Natalia Toledo, Francisco Toledo (Illustrator), Elisa Amado (Translator)
Once upon a time no creatures on Earth died. But they had baby after baby, and before long the world grew crowded. Death decided to solve the problem by challenging everyone to a skip-rope contest -- as an immortal, Death won every time, and one by one everyone succumbed to her dare. Soon, every living being knew Death. This intriguing fable is based on Francisco Toledo's series of engravings of Death, a dominant figure in Mexican culture. Toledo, the heir to the great generation of Mexican artists that included Diego Rivera and Frida Kahlo, has imaginatively explored this integral part of life, and his entrancing images are matched by poetic text from his wife Natalia.