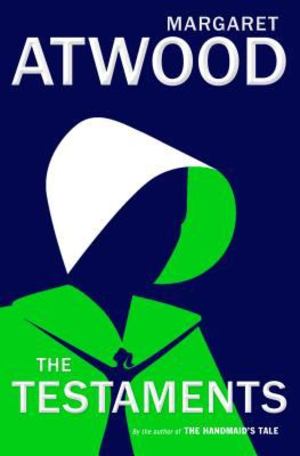 Margaret Atwood
LONGLISTED FOR THE BOOKER PRIZE In this brilliant sequel to The Handmaid's Tale, acclaimed author Margaret Atwood answers the questions that have tantalized readers for decades. When the van door slammed on Offred's future at the end of The Handmaid's Tale, readers had no way of telling what lay ahead for her--freedom, prison or death.   With The Testaments, the wait is over.   Margaret Atwood's sequel picks up the story fifteen years after Offred stepped into the unknown, with the explosive testaments of three female narrators from Gilead.   "Dear Readers: Everything you've ever asked me about Gilead and its inner workings is the inspiration for this book. Well, almost everything! The other inspiration is the world we've been living in." --Margaret Atwood

The Testaments is a sequel to one of Margaret Atwood's most popular works: The Handmaid's Tale. Although The Handmaid's Tale has become recently popular with the Hulu series, I recommend reading both of these books first! One of my favorite things about Atwood's writing style is that her books are very easy to read.  The Testaments is her most recent sequel after the public begged her to write another. It was a book that I could hardly put down! If you like dystopian worlds about scary futures and are interested in hearing about this world from the perspective of strong women, this is the book for you!

@emilycreed23
Reviewed: 2019-11-10
What a page turner! This was even better than the original Handmaid's Tale. It still had some uncomfortable details, but it was mostly focused on the story of the three women. I would recommend it for anyone who enjoyed the first book.
@ellamc
Reviewed: 2019-09-11

I was with this book almost all the way to the end, and then it seemed a tad slapdash and a bit too much like an action film for my taste. I found the collapse of Gilead unbelievable -- if I was to take that the cause was only what happens in this book. You don't go from cowing other nations to total collapse overnight, so still Atwood - as always (and I think this is one of her biggest strengths) -- leaves much to the reader to decide, specifically how exactly does Gilead (or any totalitarian state) fall? We see clearly that everyone who acts like a true believer isn't one here, but I had trouble buying some of the complete about-faces required for the whole bow-tying ceremony found at the end, and that knocked at least one star from this one for me. Honestly, it should knock more than one, but I'm feeling generous because parts of this book were very well done.

I've watched the Hulu adaption/creation and I find THIS aunt Lydia so much more realistic and believable than that one. The only other Aunt Lydia I have to compare to is the original in the Handmaid's Tale (I've decided, for my purposes, to call this duet "the Gilead books" rather than a continuation of that first title because it just isn't that anymore.)

I didn't mind the intense naivete of the Agnes character. I've met some fundamentalist christians and the ones who have grown up in these situations are often quite naive. Willingly or otherwise, they choose not to know things or simply do not hear about them in the first place. This reminds me of a girl I once knew who defected from China who simply could not believe that Tiananmen Square ever happened and even after being shown footage had a lot of trouble integrating this into her sense of the country. Those parts weren't too hard for me to accept, but I also have trouble believing Agnes goes from true believer to being willing to break every rule, escape & bring down the state in the process. She even says herself that the first generation "had a ruthlessness that we lacked." (p. 288) I had fewer problems with the Baby Nicole character after she completely breezed past the death of her parents and the information that she IS Baby Nicole (I mean it was like someone just told her that the movie isn't playing until tomorrow - zero real reaction beyond being reactionary.) Other than that though...she seemed like a very typical girl to me, and as such I can believe she'd just do what people told her without thinking, only realizing the danger later. But that's not even important b/c the girls are really almost just plot devices for the end of the book, it's Aunt Lydia who shines here. She was never a true believer - she is a survivor, and she chose to do horrible things to survive, but also to bring down an evil and corrupt system. Again - pretty believable for me.

While I was not a fan of the action sequence ending or the abrupt turnarounds (in character and action,) I loved Aunt Lydia's final pages where she tells her future reader not to judge because we haven't had to do the things she's done. She calls it so perfectly (quote to insert when I have time) and she's just so right.

Finally, I'm glad the symposium happened again and this time they got warned about sunscreen while fishing (last book it rained, remember?) But beyond that, there are some real jabs at academia there, and as someone who has spent a fair amount of time in academia, I'm always thrilled to read people mocking us. I was a little confused that the United States was mentioned as being reinstated, when in both the last book and in the text of this one we have more than one reference to the Republic of Texas (something I'm pretty sure Atwood is right about - we've just been waiting for the date at this point for a while now.)  I love my Texas friends, but...yeah, best left for another topic and another day.

More thoughts when there's time. I will fix my typoes and half-thoughts later too.