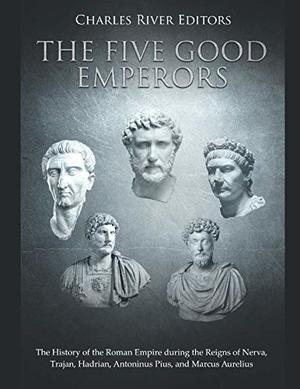 Charles River Editors
*Includes pictures *Includes online resources and a bibliography for further reading "From the study of this history we may also learn how a good government is to be established; for while all the emperors who succeeded to the throne by birth, except Titus, were bad, all were good who succeeded by adoption, as in the case of the five from Nerva to Marcus. But as soon as the empire fell once more to the heirs by birth, its ruin recommenced...Titus, Nerva, Trajan, Hadrian, Antoninus, and Marcus had no need of praetorian cohorts, or of countless legions to guard them, but were defended by their own good lives, the good-will of their subjects, and the attachment of the senate." - Niccolo Machiavelli "If a man were called upon to fix that period in the history of the world during which the condition of the human race was most happy and prosperous he would, without hesitation, name that which elapsed from the deaths of Domitian to the accession of Commodus." - Edward Gibbon "The Five Good Emperors," a reference to the five emperors who ruled the Roman Empire between 96 and 180 CE (Nerva, Trajan, Hadrian, Antoninus Pius, and Marcus Aurelius), was a term first coined by Machiavelli and later adopted and popularized by historian Edward Gibbon, who said that under these men, the Roman Empire "was governed by absolute power under the guidance of wisdom and virtue." This period of 84 years is generally regarded as the high point of the Roman Empire, at least after Augustus, but what is uncertain and a matter of ongoing debate is whether the five emperors were personally responsible for the situation and the accompanying prosperity enjoyed throughout the empire at the time or if they were simply the beneficiaries of the Pax Romana, inaugurated by Augustus in the early part of the 1st century CE. In other words, historians have wondered whether anyone in power during those years would have enjoyed the same rewards. The description of these rulers as "good" is also a matter of interpretation, with some scholars suggesting they were only "good" in comparison to the preceding emperor (Domitian) and the emperor who followed Marcus Aurelius (Commodus). Both of them were horrible rulers in every aspect, making their near contemporaries look all the better. Regardless, it is clear that the era of the Five Good Emperors was one of unparalleled success and wealth, and the reasons Rome reached its zenith at this time are worthy of scrutiny. Perhaps most noteworthy is that none of these five emperors were blood relatives - while the final two are often referred to as the Antonines, they were not, in fact, related except by adoption, a practice that may in itself provide at least part of the answer to the question as to why this particular period was so magnificent. These 84 years also witnessed an impressive growth in the size of the Roman Empire. New acquisitions ranged from northern Britain to Arabia, Mesopotamia, and Dacia. Furthermore, existing possessions were consolidated, and the empire's defenses improved when compared to what had come before. A range of countries that had been client states became fully integrated provinces, and even Italy saw administrative reforms which created further wealth. Throughout the empire, the policy of Romanization proved successful, at least in terms of introducing a common language, enabling standards of living to rise, and creating a political system minimizing internal strife. With all of that said, according to some academics, the success these rulers had in centralizing the empire's administration, while undoubtedly bringing huge benefits, also sowed the seeds for later problems. After all, as so many Roman emperors proved, from Caligula and Nero to Commodus, the empire's approach to governance was predicated on the ruler's ability. When incompetent or insane emperors came to power, the whole edifice came tumbling down.