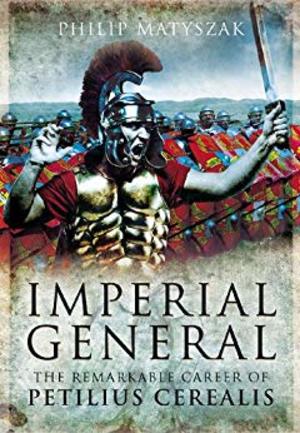 Philip Matyszak
Petilius Cerealis is one of the few Imperial Roman officers, below the level of Emperor, whose career it is possible to follow in sufficient detail to write a coherent biography. Fortunately his career was a remarkably eventful and colorful one. With a knack for being caught up in big events and emerging unscathed despite some hairy adventures (and scandal, usually involving some local wench) he appears to have been a Roman version of Blackadder and Flashman combined. Cerealis was in Britain when Boudicca's revolt erupted (60 or 61 AD) and marched to confront her. He lost most of his force but narrowly escaped with his own skin intact. In 69 AD, the infamously tumultuous 'year of the four emperors', he was in Rome, the seat of conspiracy. When his uncle, none other than Vespasian, decided to make his own bid for the imperial purple (he was to become the fourth emperor that year), Cerealis was in danger of losing his life as a traitor and had to escape from the city to join his uncle who was marching to force his way in. A short while later he was commanding a force on the Rhine when the Batavian mutiny broke out. This time he only escaped death because he was in bed with a local girl rather than in his own tent. And so it goes on... 'Imperial General is both a fascinating insight into the life of an imperial Roman officer during the period of the Principate, and a rollicking good tale told in Philip Matyszak's trademark lively style.