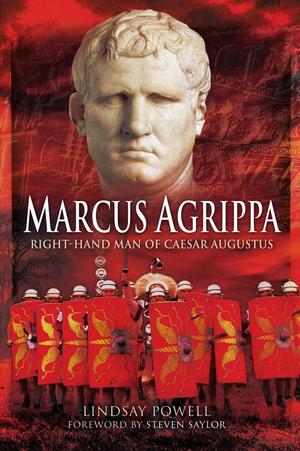 Lindsay Powell
Marcus Agrippa personified the term 'right-hand man'. As Emperor Augustus' deputy, he waged wars, pacified provinces, beautified Rome, and played a crucial role in laying the foundations of the Pax Romana for the next two hundred years but he served always in the knowledge he would never rule in his own name. Why he did so, and never grasped power exclusively for himself, has perplexed historians for centuries.??In his teens he formed a life-long friendship with Julius Caesar's great nephew, Caius Octavius, which would change world history. Following Caesar's assassination on the Ides of March 44 BC, Agrippa was instrumental in asserting his friend's rights as the dictator's heir. He established a reputation as a bold admiral, defeating Sextus Pompeius at Mylae and Naulochus (36 BC), culminating in the epoch-making Battle of Actium (31 BC), which eliminated Marcus Antonius and Queen Cleopatra as rivals. He proved his genius for military command on land by ending bloody rebellions in the Cimmerian Bosporus, Gaul, Hispania and Illyricum.??In Gaul Agrippa established the vital road network that helped turn Julius Caesar's conquests into viable provinces. As a diplomat, he befriended Herod the Great of Judaea and stabilised the East. As minister of works he overhauled Rome's drains and aqueducts, transformed public bathing in the city, created public parks with great artworks and built the original Pantheon.??Agrippa became co-ruler of the Roman Empire with Augustus and married his daughter Julia. His three sons were adopted by his friend as potential heirs to the throne. Agrippa's unexpected death in 12 BC left Augustus bereft, but his bloodline lived on in the imperial family, through Agrippina the Elder to his grandson Caligula and great grandson Nero.??MARCUS AGRIPPA is lucidly written by the author of the acclaimed biographies Eager for Glory and Germanicus. Illustrated with colour plates, figures and high quality maps, Lindsay Powell presents a penetrating new assessment of the life and achievements of the multifaceted man who put service to friend and country before himself.??A gripping, thoroughly researched and hugely impressive biography of a key player in the transition from the Roman Republic to Augustus's Empire'.? Saul David, University of Buckingham, author of WAR: From Ancient Egypt to Iraq.??Augustus' ascent and reign are unthinkable without Marcus Agrippa. Surprisingly, there has been no biography of Agrippa in English for some eighty years. Powell's book admirably fills this gap and will be indispensable for anyone with a serious interest in this crucial historical period.? Karl Galinsky, University of Texas at Austin, author of Augustus: Introduction to the Life of an Emperor.??Marcus Agrippa was one of history's most intriguing right-hand men. Few played a greater role in the emperor Augustus' success. In vigorous prose, and with a fingertip feel for Roman politics and war, Lindsay Powell brings Agrippa to life.? Barry Strauss, Cornell University, author of Masters of Command: Alexander, Hannibal, Caesar and the Genius of Leadership.