All About My Mother (Todo Sobre Mi Madre) 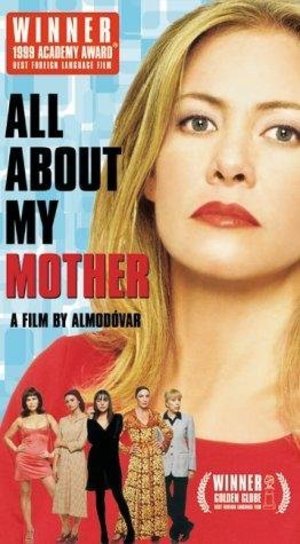 Pedro Almodóvar
After her son is killed in an accident, Manuela (Cecilia Roth) leaves Madrid for her old haunts in Barcelona. She reconnects with an old friend, a pre-op transsexual prostitute named La Agrado (Antonia San Juan), who introduces her to Rosa (Penélope Cruz), a young nun who turns out to be pregnant. Meanwhile, Manuela becomes a personal assistant for Huma Rojo (Marisa Paredes), an actress currently playing Blanche DuBois in a production of A Streetcar Named Desire. All About My Mother traces the delicate web of friendship and loss that binds these women together. The movie is dedicated to the actresses of the world, so it's not surprising that all the performances are superb. Roth in particular anchors All About My Mother with compassion and generosity. But fans of writer-director Pedro Almodóvar needn't fret--as always, Almodóvar's work undermines conventional notions of sexual identity and embraces all human possibilities with bright colors and melodramatic plotting. However, All About My Mother approaches its twists and turns with a broader emotional scope than most of Almodóvar's work; even the more extravagant aspects of the story are presented quietly, to allow the sadness of life to be as present as the irrepressible vitality of the characters. Almodóvar embraces pettiness, jealousy, and grief as much as kindness, courage, and outrageousness, and the movie is the richer for it. --Bret Fetzer